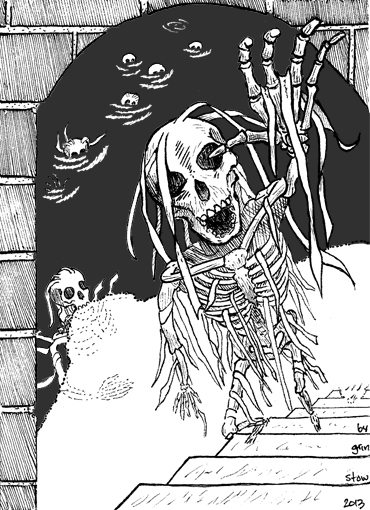 Water of Yss can form anywhere, but it is more common in deep recesses of dungeons and partially raided tombs. That is not to say that Water of Yss is in any way common.

The Water is formed when exotic, volatile and rare items, as typically carried by spell-casters, alchemists and the like, are left behind to coagulate and intermix at random — generally when the bearers of such items have succumbed to the hazards of exploration. Mixing at the bottom of some pit trap or other, these components can combine under just the right circumstances to create Water of Yss.

The corpses of the original component-bearers usually form the minions of the Water. These skeletons will claim further victims to feed to the Water and allow it to grow in size. They particularly seek out targets bearing alchemical substances and the like.

The skeletal minions can be recognized from other un-dead by the kelp-like strands that grow right from their bones. They have an endless stamina and will pursue victims tirelessly within the confines of the Water's lair. It is not entirely clear whether the bones of a destroyed minion that fall back into the Water are not simply and quickly re-assembled by the Water, and the 'new' minion immediately sent after more prey...

The longer the bones of the minions have rested in the Water of Yss, the more resilient they become (hence the variable number of Hit Dice).

The minions can exhale a toxic, ochre-colored gas, once per day. This gas first lays out in a thick layer on the ground or onto the top of the Water, but soon expands and rises to fill whatever space the minions occupy (up to a 30-foot cube in volume). Mortals breathing this thick gas take 2d3 points of damage each round (Fort DC 13 for half damage) and take 1d3 points of damage (same Save) for a number of rounds after leaving the cloud equal to half the number of rounds spent in the cloud (round up). Holding one's breath is treated like leaving the area of gas, but of course they must then deal with not breathing at all until they can escape the area. Visibility within the cloud is reduced to nearly zero, except for the minions, who are completely unimpaired and unaffected by it.

Destroying the Water of Yss is a complex matter, involving advanced alchemical or arcane knowledge. Obviously, care needs to be taken to avoid accidentally increasing it's power, rather than neutralizing it.

The Water of Yss and it's minions first appeared on the cover of Crawl! #7.