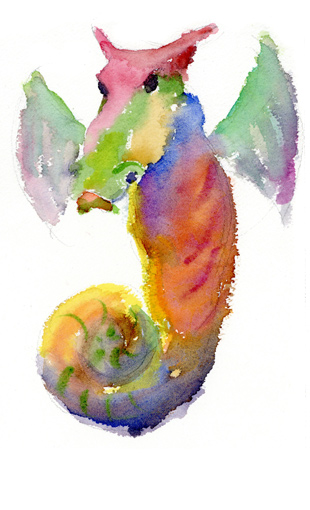 The sea dragon is a rare aquatic creature, known to 'adopt' the wrecks of ships if they bear any sort of valuable cargo.

They are themselves immune to electric forces.

They can detect sounds underwater over great distances. They can hide in any sort of undersea formation of suitable size (including shipwrecks, kelp forests, coral reefs, etc.) and remain completely unseen and undetected on a 3-in-5.

They can 'kick' with their tails with great rapidity underwater.

If they venture onto land — a rare occurrence indeed! — they must use an Action Die to remain upright with their diminutive wings, while using their tail to hop or slither.

They can only use their breath weapon once in their lifetime, usually to protect their young or even a mate, after which they expire. They 'breathe' a beam of electricity like a lightning bolt in an 80'-long, 10'-wide cylinder for 6d8+6 damage. A DC 15 Fortitude Save reduces the damage by half.

Reference the above for the monster's behavior. Save vs. Poison to avoid the electrical aura damage (1-4) when in the area. Save vs. Breath Weapon as normal.

Extracted from bygrinstow at 8:30 AM No comments:
Email ThisBlogThis!Share to TwitterShare to FacebookShare to Pinterest
Labels: BASIC, cavern, monster, water, wilderness

GELATINOUS DODECAHEDRON OF MANY THINGS 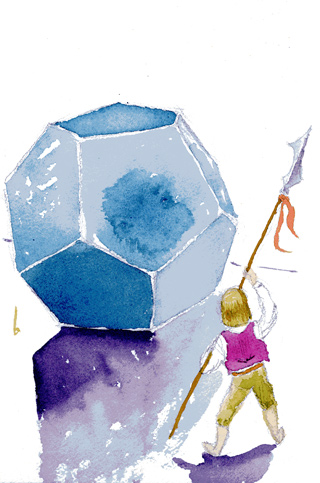 The cloudy, semi-translucent Dodecahedron must have been created by a wizard, perhaps one from another planet or another reality.

It slowly roams whatever surface it can access, absorbing everything it can into it's squidgy, gelatinous mass. Any living thing that touches the mass, either on it's own or by having the mass move into it, is paralyzed unless it can make a DC 17 Fort Save. If successful, this Save needs to be re-made for each round of contact or each repeated contact. Regardless of making the Save or not, the creature will pull things into itself with a Strength bonus of +4.

The creature will typically "roll" it's form over to prevent other creatures from 'stealing' its prey. Anyone paralyzed but removed from the creature will regain full mobility in 1d14 rounds.

Any character enveloped within the Dodecahedron for 1 round or more, if extracted then finds one of the following has occurred:

• One of their items has vanished, to be replaced by a different object. Roll randomly to choose one of the characters items, whether inconsequential and mundane or unique and of great power. A short list of substituted items is provided below, and Judges are strongly encouraged to expand this list if they have time to do so.

• One of their Attributes has changed, for better or for worse. Players should get the choice to use one of two methods. 1) Roll 1d4 to determine by how much the Attribute changes, then roll to randomly determine whether that is an increase or a decrease. 2) Re-roll the stat from scratch, by rolling 3d6 and taking the new result.

• The individual has been replaced by someone else! Roll on the Occupation chart to determine broadly who this new person is, and there is a 1-in-30 chance they are leveled-up in a Class. A useful option if a player is absent for a session or more. Where the missing character is now must be left up to the Judge...

• Some who find themselves inside a Dodcahedron experience a disorienting sense of spacial volume while inside. And there is something else in there... something horrid and violent, which they must combat while they are inside the Dodecahedron (as if in a featureless void). Judges may choose any creature they find appropriate for this foe. If the character is somehow extracted by allies, the creature may stay behind, or may grab onto the character and try to exit with them.

Random items to substitute for vanished items (roll 1d14 or 1d12 as appropriate):

5/5)    A coating of amber slime on their off-hand arm, which hardens after extraction to act as a shield which they can't put down. The arm is half as limber as it was formerly.

9/7)    A "Battle" Axe of unfamiliar design, made from an unknown, "unbreakable" material.

10/8)   A Box of small, brown, dried Leaves. When brewed as a tea and consumed, it improves natural healing by a factor of five.

11/9)   A Cybernetic Respirator, which attaches to the wielder permanently and protects them from airborne threats and lack of air.

13/11)  A glittering Longsword which adds the wielder's Personality modifier to it's attacks and damage.

14/12)  A "genie's lamp" which when polished emits a smoke which flies up the nose of the bearer. Failing a DC 14 Fort Save means taking 1d6 damage. The character gains 2d6 Luck.