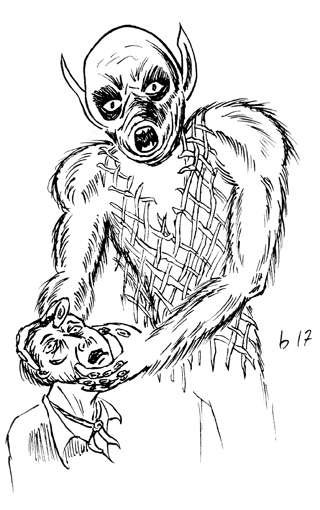 The Salt Orlok is a devilish thing that preys from the shadows on humanoids, leaving death and chaos in its wake. Highly cunning, they often play upon the emotions of a single person or a very few, in order to open up opportunities for them to prey on many, many others, all the while using those few 'allies' as cover and protection for their horrible feasting.

The Salt Orlok can transmogrify itself into the appearance of any humanoid they have seen, including their voice and body language. They can also turn into small verminous animals, such as bats or rats.

Any persons or creatures struck down to 0 hit points by the Salt Orlok's scratch do not die, but fall into a deep, abiding sleep. Easy then to leech the salt from their bodies...

The first time a target is struck by the Salt Orlok's salt leeching ability they suffer 1d10+1d5 points of damage and drop one step on the Dice Chain for all actions and rolls for 1d5 Turns. The second time they are struck within the same day, they suffer a further 1d14+1d7 points of damage and drop two steps on the Dice Chain for 2d7 hours. The third time they are struck within the same day, they become barely conscious, unable to act, and must succeed at a "roll the body" check every hour, or die. Succeeding does not mean the character is returned to health, only that they don't die (yet). They will recover with care after 1d8+6 hours, or by other means the Judge rules will restore the body's chemical equilibrium. Consuming salt to replace lost salt is assumed to be a part of "recovery with care".

The physical damage done from each strike is not recoverable for an extra 24 hours. Thus the first strike's damage is not healed until a time of rest coming after 24 hours have passed, and the second strike's damage is not healed until after 48 hours have elapsed. If a new salt leeching strike occurs before these periods have passed, it is as if they have happened on the "same day". This is a supernatural effect, and includes the usual Clerical healing abilities, although Divine Aid may bypass the time frame.

The Salt Orlok is completely destroyed by this world's sunlight in 1d7 rounds. It can continue to act during it's disintegration. Apportion remaining hit points accordingly. If partially destroyed, the Salt Orlok can recover 1 round of damage in 1d100 years, preferring seclusion while doing so. This may punt the threat down to subsequent generations.

The Salt Orlok may have levels as a Wizard, as well their other hellish abilities, if the Judge so desires. Determine how many Hit Dice you wish to add to represent Wizard training. Check this new HD total on the Wizard Class chart to determine the number of spells they can have and what is the highest level, as if they were a Wizard of that number of Levels. So, adding three Hit Dice for Wizardry gives a Salt Orlok 8 Hit Dice and up to 12 different spells of up to 4th Level (as an 8th Level Wizard). Then for each spell they have, roll a d20 once, adding their new HD total. The result of each roll is the effect they can create for each spell, e.g., if one of the spells chosen is Levitate, and the roll was a total of 23, then when they manifest this spell they always do so with a result of 23 on the spell's result chart. If they generate a result of 'failure' or below for any spell, they do not have access to that spell after all, and there is no choosing a replacement. They can cast a number of times per day equal to 5 plus their new HD total, choosing any spell from their list each time when casting. When casting they must give up an Action Die, even though there is no roll.

The Rod of Strange Stars
This rod is topped with a large crystal with many facets of irregular shape and size. It can cast a beam of light that comes from one of 40 suns. Roll 1d16+1d14+1d12 -2 to determine which sun's light is transmitted through the rod each time it is activated. The beam has an effective reach as listed below and can be seen from a distance of 1/2 mile.

Make a list of 40 lines to represent each possible sun. As the rod is used, roll below for random light qualities of any given result (roll for each column separately) and jot down the qualities of that result:

With much research it is possible to learn how to make the rod emit a particular sun's rays. Such research takes 1d3 weeks and 4d100 gold to unlock the 'secret' of 1d4 results of the rod, i.e., the special command to utter to cause a specific sun's rays to shine, the name/source of that sun, etc.


Extracted from bygrinstow at 8:30 AM No comments:
Email ThisBlogThis!Share to TwitterShare to FacebookShare to Pinterest
Labels: civilization, magic-item, monster, tomb, un-dead 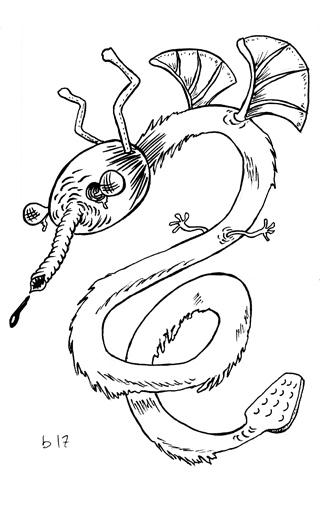 Snake-like, the Giant Tar Spitter is over 200 feet long, the equivalent of 6-8 fire trucks in length. It dwells in a secluded corner of a vast (grand?) canyon, seldom seen, but always feared by anyone with half a brain.

It can control fire, as per the spell.

When it attacks other creatures, it uses its bite to pierce their flesh, but does not eat them, drinking most of their blood over 1-3 rounds instead.

When resolving the effect of it's tarry breath, the one attack roll should be compared to the AC of each target in the area, but the damage should be rolled separately for each target hit, the spray being uneven and unpredictable.

Extracted from bygrinstow at 8:30 AM No comments:
Email ThisBlogThis!Share to TwitterShare to FacebookShare to Pinterest
Labels: cavern, desert, flying, gigantic, monster, wilderness 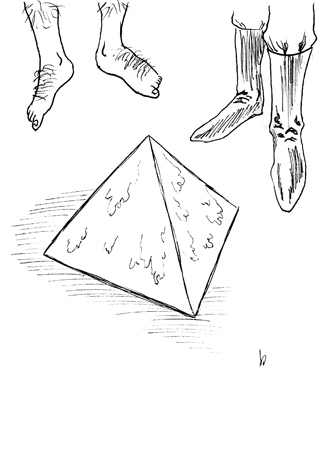 The translucent Tetrahedrons vary in size from 12 to 24 inches on a side.

They slowly roam whatever level surface they can access. Any living thing that touches the mass, either on it's own or by having the mass move into it, is affected by shooting numbness. The target must make a DC 15 Fort Save or have their Action Dice moved down the Chain by one step in a cumulative effect. This Save needs to be made for each round of contact or each repeated contact. The Tetrahedron's very short-ranged jet of liquid has the same effect. Anything that a Tetrahedron reduces to below a d3 on the Dice Chain they have completely paralyzed, and they will then proceed to glom onto the now-inert form and attempt to eat them (a slow process of days or even weeks).

Once away from the numbing influence, Action Dice move back up the Dice Chain one step at a time by making a new Save vs. a DC 10 once each Turn, with a success equaling one step back up.

Gelatinous Tetrahedrons are not a huge threat when encountered singly, but they have sometimes been deployed in small groups at either end of trapped hallways, for instance...

If ever six Tetrahedrons are together, they will skloodge into each other and form a Cube, which will grow in size as it consumes digestible matter.

[Unless you have other stats you'd like to use for a newly-formed Cube, consider it to be improved by 1d3+2 in almost all statistical respects above (Move 30, 1d20 Action Die), and that it's numbness power takes a target 1d3 steps down the Dice Chain with each successful attack.]

Reference the above for the monster's behavior. Save vs. Poison or be limited to acting every other round the first time, "feeble" minor actions only after a second failed Save, and not at all after the third failed Save. Each step of mobility returns after a successful Save made once per Turn.