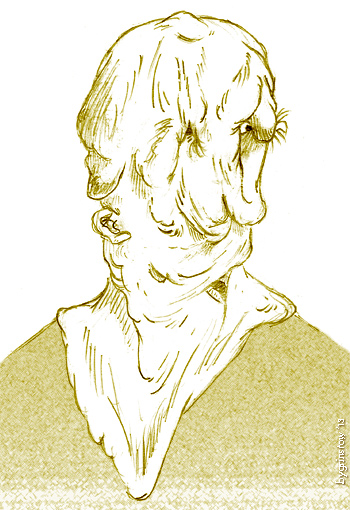 His visage abhorrent to behold, his flesh slowly flowing down his skull, Tahn-Ru can make mighty men pale and falter. His spells are for hire, and he specializes in entrapping nobles, travellers, and persons of note, keeping them alive for his paymasters. He has a mighty intelligence that he turns to devising intricate, irresistible situations that lead to the collection of his targets. He is more than willing to play a long game in pursuit of his pay.

Mortals upon first laying eyes on Tahn-Ru's disgusting, slack visage, need to make two Will Saves vs. a DC 17, such is the horror show of his face. Failing one leaves the subject to throw all dice at one die-step lower for the next 1d3 rounds. Failing both, the penalty is two die-steps for 2d3 rounds. Non-leveled characters failing one save are dumbstruck, unable to act (with the sole option of fleeing) over the next 1d8 rounds, and those failing both saves flee indiscriminately for 1d14 rounds.

Tahn-Ru casts the following effects by rolling a d30 and matching or exceeding the target number indicated for each effect. This d30 roll replaces his d20 Action die. Any result of a natural 1 on the d30 causes Tahn-Ru excruciating pain that immobilizes him for 1d5 rounds. Saves against Tahn-Ru's spells should be made against the referenced result, not the result of the d30 roll.

Once per week, he can cast a second spell within a single round, or both cast as normal and use his Action die for some other task.

He also carries the Staff of Tahn-Ru with the following properties:

• Negates some or all natural light in a 40-foot radius, at will, at up to a range of 100 feet. This effect can be moved at will, even keeping a moving target within it's effect (until they move out of range).

• The staff is considered a +1 magical weapon.

• All saves for spells cast while the staff is held are at +1 difficulty.

• Tahn-Ru takes 3d4 damage if the staff is destroyed. The staff has 6 hp, and an effective AC of 16 for striking it in combat in such a way as to harm it. 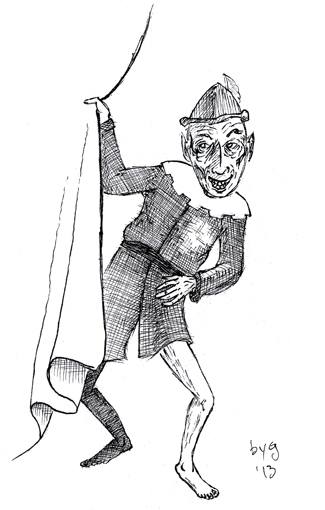 A kobold is a creature of the spirit realm. They are merely two to three feet in height, and have the features of wizened old folk. Their legs are reversed from those of mortal folk, one of which is as black as soot. They emit light from their chests, and they are able to vary this light from a dim glow to a bright torch light.

They are incorrigible mischief makers, liable when found to be amidst one of the following deeds:

• Robbing nappers of food or coin.

• Moving objects around in a home while residents are away (sometimes placing the objects in the home of another).

• Removing important municipal items or replacing those items 24 hours after having taken them.

• Seeking care and comfort from humans in the form of an animal -- often a distressed animal, such as a soaking wet house cat, or a snake bit hen.

They can also perform good deeds such as raising an alarm to impending trouble, making known structural damage of a ship or a home, or waking sleepers in a burning building.

They have several abilities that they can use once per day each:

• They can move as a bright blue streak of light for quadruple their normal movement (they must drop stolen or other borne items in this form).

• They can shoot a blast of fire from their finger tips (2d6 fire damage, which each are re-rolled if they come up '6', with the new roll added to the original result).

• They can assume the form of a common animal, often a small domestic animal.

• They can assume the form of an object, often a household object.

• They can turn invisible, except for the light emitted from their chest.

• 1-in-3 Kobolds can assume the form of an adult human.

Kobolds are the spirits of deceased children who died long, long ago, but who have remained in the mortal world and become warped by centuries of existence. As such, they have one foot in the spirit realm (hence the coal-black leg), and are in contact with ghosts, revenants and ethereal echos. If they were killed by a weapon, they will be carrying a version of that weapon and can use it ably.

They are often linked to a home or other place important to the child or to his family, such as a ship, a mine, a road or a pasture.