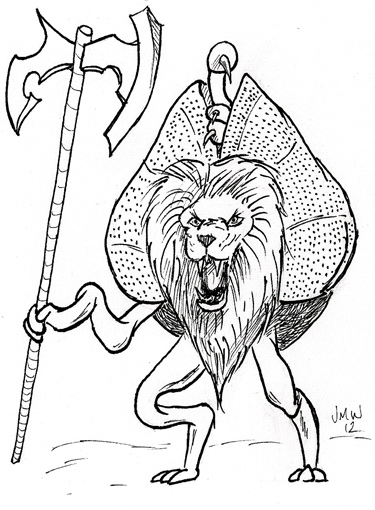 The Mandriano, or Drover Demons, herd the damned to their torment in Hell. Most of their bulk is covered in a thick, dimpled shell that they can flex open to reveal appendages with poisoned barbs. They have the head of a lion, and powerful, twisted limbs -- two legs to bear their massive bulk, and a single long, multi-jointed arm.

Reaching ten feet in height, they tower over the damned and use the butt of their polearms to shove and bludgeon the damned to their fate. They also serve as the first line of defense, should Hell be invaded by paladins, crusaders and the like.

The business end of their pole-arm weapons can bludgeon, pierce and slash, bypassing any particular defenses against one or more of such attacks. The heads of these weapons are also slightly four-dimensional, and anybody viewing the weapon close-up needs to succeed on a Will save vs. DC 11 or be distracted by the impossible angles and uncertain perspective, losing a turn. On a successful strike, the damage dealt was done to the target 1d4 rounds in the past, and they have now stood where they were, immobile, ever since. By thus changing events, the Mandriano recovers that die result in d4 of healing, as if those wounds never happened. However, no healing occurs for other individuals.

They also have three or four chubby, worm-like appendages which wobble out from their shell and can strike with ferocious speed. The barb striking true does not inflict great harm, but it does induce sleep (Fort save vs. DC 17 to resist). This sleep will last (damage inflicted)x10 minutes, unless alchemically or magically interrupted. Mandriano will use their wormy appendages to drag sleeping targets to their masters.

Extracted from bygrinstow at 4:00 PM No comments:
Email ThisBlogThis!Share to TwitterShare to FacebookShare to Pinterest
Labels: demon, monster

The Devil Made Me Do It

Yes, this is me, sinning again -- no new monsters.

Two weeks from today, I'm running a Dungeon Crawl Classics game at DunDraCon 37. That's right, DCC @ DDC. The self-penned adventure is called Short Trip To Hell, and I hope it isn't. So I'm pouring as many good ideas into it as I can. Part of that process is that I keep stealing monsters that I think I'm going to post here and instead, saving them for the convention.

Now, I could have been posting them here for the past several weeks, and damn the consequences. I know this isn't the most viewed blog in the world, and I'm sure a significant portion of what views I do get, are spam spiders (zing! new monster idea!). But given that I've posted on Goodman Games' board about my game at DDC, and that I have mentioned this blog there as well, AND that there is at least one person who's posted back about trying to make it to my game... well, why take the chance and spoil his fun?

In two weeks from right now, I and six to seven players will be knee deep in Hell, and hopefully having a helluva good time with it. And I'll set up at least one of those hellspawn to publish that Friday -- 'cause we will all fry together when we fry...!