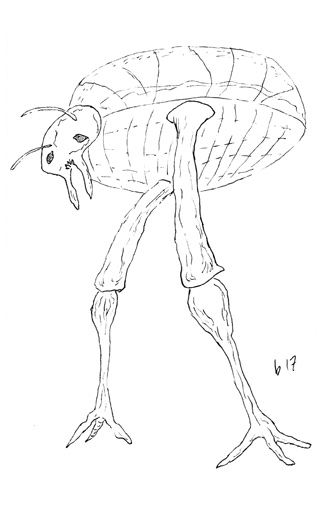 Found in wilderness areas far from any sort of civilization, house beetles are inscctoids with translucent carapaces that are the size of a house, standing 35 feet high.

They attack pests by either kicking at them or surreptitiously positioning themselves over the largest cluster of pests (perhaps over 2 or 3 rounds) then abruptly dropping down upon them, it's legs retracting into it's body carapace. To resolve this attack, have all targets make a roll-under Luck check — the worst 1d3 checks are those stuck under the bug when it hits the ground, taking 1d24 damage. However, if any of the checks come up as a tie ("I made it by 4!" "So did I!"), then the number rolled on the d3 is reduced by 1.

The creature's carapace may be weaker when it's near to molting.

Extracted from bygrinstow at 8:30 AM No comments:
Email ThisBlogThis!Share to TwitterShare to FacebookShare to Pinterest
Labels: gigantic, monster, wilderness 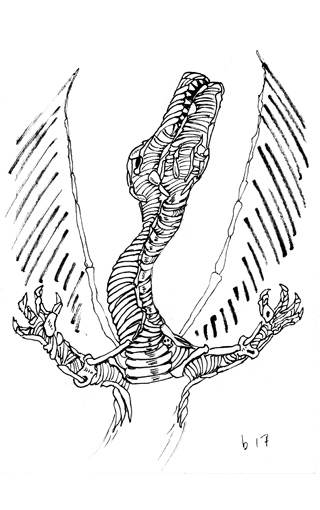 Summoned by a powerful cabal of wizards working in conjunction, a Bonecast Dragon is composed of graveyard bones animated by the spirit of a destroyed demon. The wizards may or may not find their will subverted, with the Dragon pursuing its own goal and not theirs.

The necrosis breath literally decays the flesh of those caught within it. It looks like tendrils or snakes of black smoke silently rushing out from the Dragon's mouth, weaving through the 60' range as if seeking the living, evaporating once they reach full range. Those in range of the attack and aware of it can either attempt to dodge these tendrils by means of a Reflex Save for one-third damage, or resist physically by a Fort Save for half damage. Clerics of an appropriate faith may opt to completely avoid the breath's effects with a Will Save. The breath attack does 1d6 damage (rolled once) applied to Strength, Agility and Stamina (always a minimum of 1 against anyone in the range).

Ash Cloud: Once per Turn, the Bonecast Dragon can create a funnel of crematory ash by giving up an Action Die (either an Action Die or all spell dice). The funnel is 30' across at it's base and extends upward 40' with an upper width of 60'. The Dragon maintains it by concentration, giving up an Action Die each round to do so. Any living creature within the effect takes 1d4 Stamina damage each round, until they are no longer in the effect, then taking 1 point of Stamina damage the following round. The damage is halved if the target can make a DC 18 Fort Save. By giving up an extra Action Die, the Dragon can move the funnel up to 50', striking every living creature in it's path.

Once per day, the Bonecast Dragon can cause one of it's melee strikes to drain 2d3 points of Luck from the target of the strike (in addition to normal damage). It can decide to engage this effect after rolling the attack. If the attack happens to be a Critical Hit, it can forgo the usual Crit result, and instead drain the target of all of their Luck.

The Action Dice used for spells may only be used for a single spell per round. If the 1d24 roll fails, the 1d20 die can be used to attempt to enact the same spell, if desired. And should that fail, then the 1d16 can be attempted. In any case, a single successful spell is the best the creature can achieve within any given round.


CREATION
Wizards combining their powers to create a Bonecast Dragon compare their combined spellcasting checks to the following chart. Each Wizard must be able to cast the spell "Create Bonecast Dragon" with the same mercurial magic result, or with no mercurial magic result (a mixture of the same result and no result also works). Preparation takes one week per Wizard and the casting must be completed at midnight.

61-70  Success, creature as given above, but subtract 25% HD, drop 2 from spellcasting, drop the DR, and drop to 1 use of necrotic breath.

Once a Bonecast Dragon has been created, there is a psychic test of wills between the creature and it's creators. Each Wizard must make a contested Will Save vs. the Will Save of the Dragon. As long as at least one Wizard beats the Dragon, the Dragon bows to it's creators. If only some Wizards succeed, they can attempt to shut out those Wizards who fail their check by making opposed Will Saves against each other. If those Wizards who failed against the Dragon also fail again in this test, they can in no way command the Dragon, though they may be able to apply other means to sway the demon-spirit that powers the Dragon.