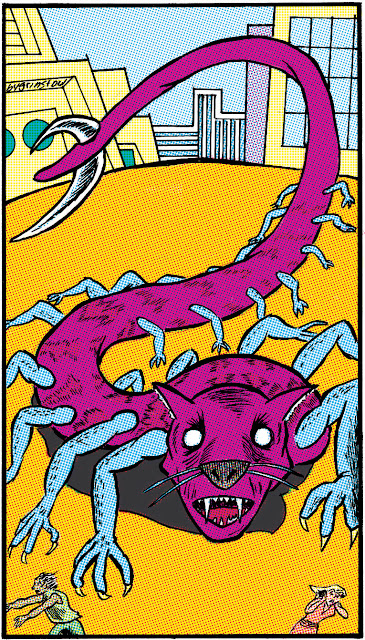 Once every 1d24 years, Tahudei burrows up from deep in the earth and wreaks havoc upon the surface of the world. It roams in search of food, as simple as that, eating whatever animal life it comes across.

Seventy-four feet long, Tahudei can burrow through the earth as fast as it can run. When it is head-down in the dirt, with it's tail still above the surface, the AC of its tail is considered to be a 15.

After it has consumed approximately 500 pounds of meat, sinew, and bone, the creature will burrow back down to some nest deep beneath the surface and remain there for another 1d24 years.


Extracted from bygrinstow at 8:30 AM No comments:
Email ThisBlogThis!Share to TwitterShare to FacebookShare to Pinterest
Labels: cavern, civilization, gigantic, monster, wilderness 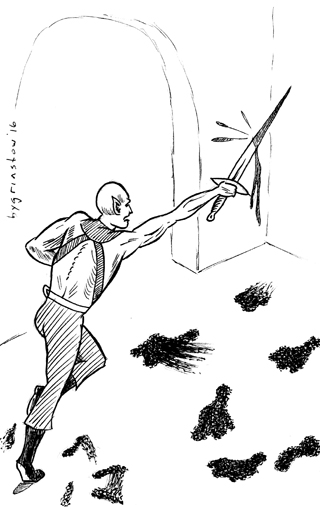 The Damned Thing is a large, ferocious creature, invisible to men's eyes (and those of Elves, Dwarves, Halflings, Zorbits, and other humanoid creatures). It is content to live it's life alone in the wilderness, but reacts violently if disturbed. And being invisible, it can be difficult to not disturb it.

Owing to the creature's invisible nature, it's Armor Class is variable. If it is facing off with only one opponent, it's AC is higher on average than if a dozen men are in melee with it. If that one opponent can get in their attacks in close proximity, each successive attack will have an easier chance to hit, as will the successive attacks of those dozen men. The Thing's AC changes as follows:

This simulates "zeroing in" on exactly where the creature is, and what it is shaped like. The Judge is encouraged to drop an extra step or two down the chart for appropriate area effect attacks. For affects that "can't miss" but still need to be targeted at something, consider adding the AC Bonus Die to a Saving Throw, or using the AC Bonus Die in other ways to reflect how difficult it is to target the Thing. Similarly, if the Damned Thing is found in a field of wheat, start the process two or three steps down the chart, to simulate the fact that the "hole" in the wheat gives the creature's location away (though does not reveal it's entire outline).

If the Damned Thing should be caught by surprise use only it's base AC for defense.

If the creature should attack with both claw attacks at once against one target, and both attacks land successfully, it can immediately make a third claw attack against that target.

The creature is completely and utterly silent in all cases and in all of it's actions.


Drawn from the story of the same name by Ambrose Bierce.