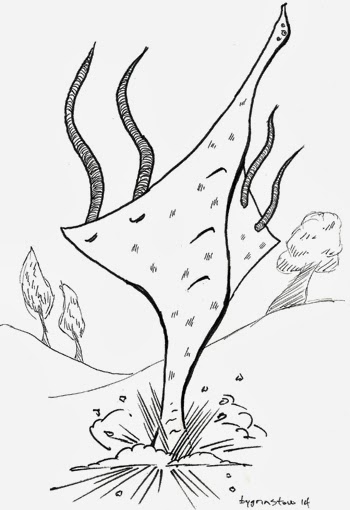 The Dirt Diver lays in wait a few feet under the surface of the ground, ready for the vibration of stock animals or horsemen or large troupes of humanoids to pass above it. It can then burst up through the ground, lashing out at the creatures that created the vibration. It sails through the air, able to re-direct itself to strike more targets on the way down, before re-entering the ground. It then travels underground, re-emerging to start the attack all over again.

The Diver can only accomplish this in relatively loose soil. It's attacks tear up the terrain, creating hazards to movement; after a couple of rounds, it may take a simple Dex check to not be stopped mid-move when moving over areas torn up by the Diver.

When attacking, the Dirt Diver should generally finish it's round up at the apex of it's leap into the sky, descending and attacking again on the following round, finishing with burrowing again into the earth. It then spends a round under the earth, repositioning and burrowing deep enough to again launch itself into the air, striking again on both the rise and fall.

The paralysis poison dealt by the tendril attack is not injected with each blow. When the damage die for the tendril attack comes up with from 2 to 6, it simply deals that damage, a severe lashing. When it comes up with a 1 -- a precision strike -- the poison is injected. It is not a powerful poison, and it takes only a Fort Save vs. DC 10 to shake it off. Failing the Save, the paralysis lasts for 1d3 Turns.

If the creature strikes someone down or manages to paralyze them, it will settle over them and begin to absorb all fluids from their body (1d8-5 Stamina [or Con] damage per round).

The body of the Diver is thin and leathery, covered in millions upon millions of tiny cilia. When it dives into the ground, it leaves no tunnel -- like a piece of parchment able to pull itself into the soil.

They frequently hunt along roads and near natural watering holes.