THE BEAST WAITING (IN THE BUSHES [of love]) 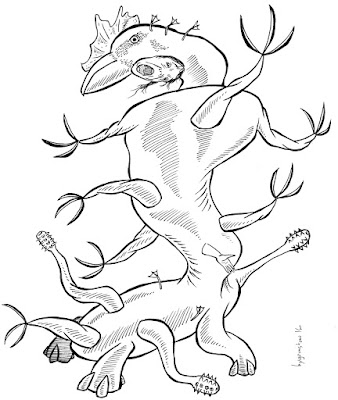 "Forty-nine times we fought that beast..."

The Beast Waiting only attacks those who love. Whether that is a romantic emotion, or paternal, or filial or otherwise, only those who exhibit a strong bond to another being can be targeted by this creature. Beings that exhibit no attachment to anyone else (not even a pet) can attack the creature, but the creature cannot attack them back.

When it attacks it's target, the thing brings strong and cherished emotions to the surface of the target's mind. The target may not understand what is happening. The Beast Waiting has no need to fight to the death; harrying it's targets is good enough for it.

It can perceive equally well in all situations: daylight, night, fog, smoke, loud environs, underwater, obscuring magic, and so on.

The Beast Waiting can hide in foliage with near perfect concealment (29-in-30). Even the most expert woodsman could walk right by, say, a bush the thing is hiding in and not notice it was there. It can move among flora with great stealth, being undetected on an 11-in-12 (alternately, use a DC 22 check to detect it hiding, and a DC 20 check when it moves).

When it flies it is nearly silent — but looks for all the world as if it is struggling to get away from something that has snared it.

It cannot simply be killed. When reduced to zero hit points, its towering body melts into a tarry goo, which quickly turns to ash and drifts away on the wind. Because love still exists, it comes back into existence 1d30 days later.

To finally destroy the thing once and for all, the thing's target must concentrate on those they love while fighting the beast. This is something they are going to have to realize for themselves. This concentration must be intense enough to reduce all Action Dice for the round by one step down the Dice Chain. This weakens the thing's life-tether, meaning it can be truly destroyed if killed within the next 1d3 rounds. If a character concentrates so hard as to reduce their Action Dice more than one step, and additional 1d2 rounds of weakening occurs for every additional step down the Dice Chain they take. They must be within 20' of the thing for this weakening to occur.

They say everyone of us has something waiting in the bushes for us.

Below is a chart of suitable details for whenever the thing kills a target...

Extracted from bygrinstow at 10:30 AM 1 comment:
Email ThisBlogThis!Share to TwitterShare to FacebookShare to Pinterest
Labels: civilization, faerie, flying, monster, wilderness 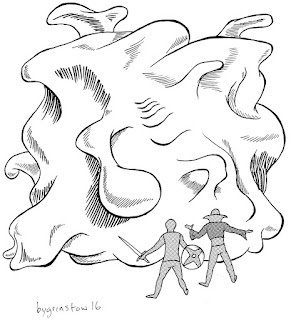 The Living Cloud is a marauder, roaming the land and collecting samples of everything it encounters. It is comprised of millions upon millions of impossibly tiny organisms, which can each act independently or collectively with a single thought process. These miniscule organisms can break away singly or in small groups, doing so for defense or to carry away samples collected.

The Living Cloud is dark grey in appearance, and while it can float and change shape as does a fog bank, to touch it is like touching something part way between a foam pad and a gelatin. The Living Cloud can also change consistency to a rigidity like iron or disperse completely into invisible nothingness, reforming elsewhere when it sees fit. It has an approximate volume of 30' cubed on average, though this very gradually reduces over time as small portions fly away with samples to unknown regions. It can compress down to a volume of 8' cubed, and expand to 100' cubed and still be visible and effective.

Whether the Living Cloud is animal, vegetable, magic, phantom or illusion, no man knows. The samples it collects are so small as to be unnoticeable (though were it to focus on a single item, it's multitudinousness could completely dismantle it; it could remove a lake, tiny droplet by tiny droplet, undetectably).

There is no discernible pattern to the Living Cloud's roaming. It can pass through a village or city in haphazard fashion and resume rolling over the countryside. There is likewise no pattern to the objects and beings it crosses over; it is as likely to pass through a blacksmiths as a bakery as it is a stable. There is in fact, only one known substance it seems to behave differently around: diamonds.

When discovering diamonds of any size, the Living Cloud will wrest the entire gem away, and a portion of itself will carry off the diamond. Lately, some climbers have found diamonds systematically arranged on the peaks of the highest mountains, but what significance this has no one has been able to determine.

If threatened, the Living Cloud will defend itself by grabbing at it's attackers with a pseudopod-like projection and pulling the attackers into itself. Generally, they are ejected seconds later with their bodies mangled and mashed together into a single mass. If attacking multiple targets who are reasonably close together, the Cloud makes a single attack roll, but divides its bonus among the targets equally, and rounds all fractions up. So if striking at three targets, its attack roll would be 1d24+5, vs. each target's AC.

NB: Stats are provided for those who wish to treat the Living Cloud like a creature that can be fought — while the intention is to treat the thing more like an alien force of nature. Large-scale effects may have some impact on the Living Cloud, as the Judge prefers, but a simple sharpened blade or projectile should have no discernible effect on the thing.

"...the cloud's progress ceased, and its outlines became vague and ragged. Fragments of it actually drifted away on the winds and dissipated themselves. Almost as soon as the message was completed, the cloud began to define itself again, and lay for a quarter of an hour at rest. A dozen bold young men from the town now approached the dark mass out of curiosity. No sooner did they come face to face with it, round a bend in the valley, than the cloud rapidly contracted, till it was no bigger than a house. Looking now something between a dense, opaque fume and an actual jelly, it lay still until the party had ventured within a few yards. Evidently their courage failed, for they were seen to turn. But before they had retreated three paces, a long proboscis shot out of the main mass with the speed of a chameleon's tongue, and enveloped them. Slowly it withdrew; but the young men had been gathered in with it. The cloud, or jelly, churned itself violently for some seconds, then ejected the bodies in a single chewed lump."

Extracted from bygrinstow at 8:00 AM No comments:
Email ThisBlogThis!Share to TwitterShare to FacebookShare to Pinterest
Labels: alien, civilization, flying, monster, wilderness 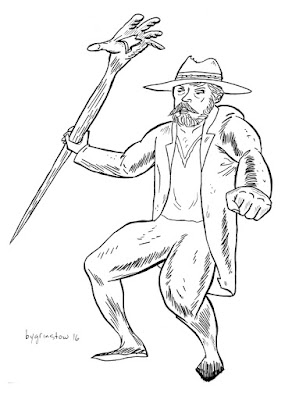 Torgo watches over the place wh- while the Master is away.

"The Place" appears when travelers are lost and should surely have reached their destination long beforehand. It is a simple-seeming cottage, appearing completely innocuous and of its location. In truth, it is a psychic construct, an oubliette of the mind. It exists within the mind of the Master, seeking out those who are lost while he sleeps. The Place offers shelter and a veneer of comfort, if a dingy, lackluster sort of comfort.

Torgo's social attacks prepare those lost to be inducted into the Master's coven — or to be destroyed or transformed by the Master, as he sees fit.

Torgo's gait is attention-grabbing and disturbing. Those that see him shamble along must succeed in a Fort Save or else have their Will Save suppressed by 1. This effect is cumulative, so the longer one spends in the Place, the more likely one is to be weakened.

As a PC's Will is weakened, they can more easily penetrate the artificial barriers of the veneer of the Place, and move into the realm of the Master, perhaps discovering his coven, his demon dogs, or even the Master himself.

If alone with a female traveler, Torgo will attempt to make a pass at them, complimenting their beauty or strength or whatever traits are most noticeable. If he succeeds, they are marked for his Master; this mark means the Master moves to a more advantageous position one-step along the Dice Chain against that individual for all actions.

The Master is a demon-blooded man who has built up a sizable coven. Torgo has been marked by him, and thus is afflicted with un-death. Torgo will return to life if killed. His dead body regenerates at a rate of 1 hp per day, until he returns to full hit points and resumes a life-like state. His demon-mark also means that other demons can control him more easily.