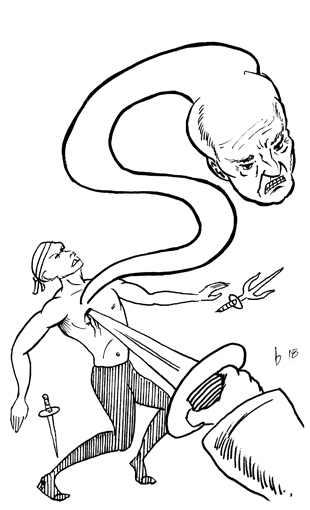 750-some years ago, an armorer was attacked from behind and killed. His spirit was cast into an insect instead of rising to the beyond...

Since that time, the spirit has slowly clawed it's way up the chain of life forms until it can now inhabit a simple humanoid, such as gorblins, zorbits, or — rarely — even some humans. However, over the years its former intelligence has dwindled, leaving only a low, feral consciousness.

Thus when the host creature is destroyed, the spirit rises immediately to lash out at whomever has disturbed them.

The spirit's possession power primarily makes it immune to detection and attack, only being forced out upon the death of the living vehicle. In this era, the subject of this power gets a Will Save at a DC 16 minus their number of HD to block the possession. Upon a successful possession, the spirit can only subtly influence the creature's actions, though this influence may increase over time...