In either case, the ability damage can be recovered at a rate of 1 point per hour, once the victim starts imbibing fluids.

The ooze that the phustyss creates has two effects:

• It creates a slippery coating on the ground of any area where the creature has been. Within it's lair and hunting grounds, that's pretty much everywhere. Such slippery terrain requires a DC 14 Reflex Save to move at half speed. Attempting to move at full speed on the slime requires a DC 20 Save, and failure leaves the person attempting the move prone in the slime.

• As the thick slime evaporates into the air, it causes all flame brought into the area to sputter and burn poorly. Small sources such as candles may go out entirely, and larger fires dwindle and light less than half their normal range.

A phustyss is never less than sure-footed treading on it's own slime, and it allows the creature to ignore the first 10 points of damage from any source of fire or heat.

Phustyssi are most often found in a group of three, one to guard the lair, and two to hunt sources of nourishment/fluids -- although larger groups have been encountered.

* This optional adjustment can be used to represent a phustyss in urgent need of fluids. 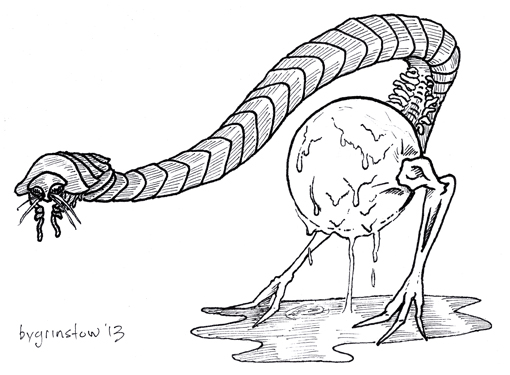 Extracted from bygrinstow at 3:00 AM No comments:
Email ThisBlogThis!Share to TwitterShare to FacebookShare to Pinterest
Labels: dungeon, monster

Get In The Prison Of The Squid Sorcerer 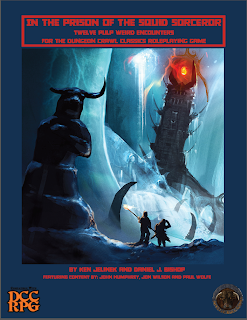 Yeah, I know you're guilty. It's written all over your face.

So get in there. The Prison was made for you. You'll be bunking in a cell next to the Mermaids from Yuggoth, perhaps. Sitting next to The Painted Woman at chow time. Shooting hoops with the Fleshrenders out in the yard. And when the Shadow of Malagok comes up behind you (while you're cheering on a fight between Umbo the ape-man and the Flickering Demon over the Coin of Calcia), don't worry -- he doesn't have a shiv. He doesn't need one...

You can steal from them if you dare -- or take over the operations they're running inside and outside the slammer just as they are.

You've been sentenced to twelve short adventures and adventure seeds. Play them as short one-shots, or use them as inspiration for longer term adventures. It's up to you how you fill those long, dark hours in your 10 by 10 stone cell with a skarajian across the cell block from you, giving you the stink-eye and slowly drawing one claw repeatedly across it's neck.

See you when if you get out.


Extracted from bygrinstow at 5:00 PM No comments:
Email ThisBlogThis!Share to TwitterShare to FacebookShare to Pinterest
Labels: Behind-the-scenes 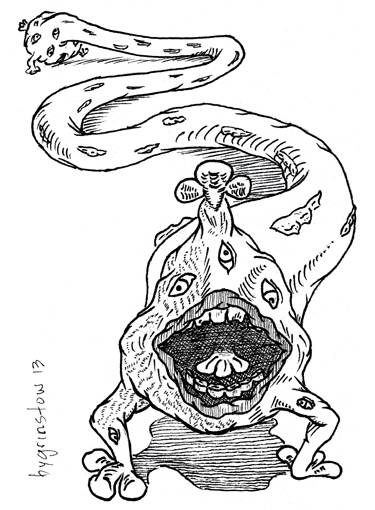 Most scholars agree that the Skwog is the creation of Tahn-Ru, a sorcerer of the 8th Dynasty of Pussh, who worked his magic just prior to the rectification of the Vuldranai. They do not agree on whether the Skwog was a successful creation, or a failure. Similarly, how the Skwog has survived into the present time is a source of heated debate.

The Skwog is approximately 90 feet long, and it's serpentine body is as thick as the torso of a horse. The rubbery length of it's body is punctuated with rough, bony protrusions. Each end of the Skwog flares out into a bulbous shape that features a large mouth that nearly bifurcates that shape when open. Each end also features numerous eyes and three strong legs.

The beast seems to have a vehement hatred of spellcasters and seeks to destroy them first, foremost and single-mindedly. This is perhaps why Tahn-Ru disappears from the historical record as abruptly as he does, which is a much favored argument by those scholars supposing that the Skwog is a failed creation.

The Skwog defends its territory and hunts by partially encircling it's prey. Then one end of it's body jumps generally toward the other, and past it, causing whoever or whatever is encircled to be raked by the many bony protrusions of it's body and flinging the target 3d6x10 ft away in a random direction, causing further damage*. The Skwog then moves to encircle it again and repeats the process until the prey no longer moves. Given it's immense proportions, it is difficult for most prey to escape this attack entirely, even during the time when the Skwog is just getting into position for it's raking leap. If multiple targets are launched in this way, the distance they all fly is divided by their numbers, e.g., three targets will each fly one-third as far as a single target (and each target's random direction should be determined independently).

For a creature to avoid becoming a missile, they must succeed at a Reflex Save vs. a DC of 20; if their roll would at least succeed vs. a DC 15, they will only fly half the rolled distance away.

Given that the pads of the Skwog's feet can cling to surfaces, it can employ a great deal of creativity in it's attacks. It can even lurk on a ceiling, jump down with surprise, and fling prey immediately on it's next action. With it's many alert eyes it is nearly never taken by surprise. The dampness of it's pearlescent skin means it takes half-damage from fire or heat sources.

When it is brought below half of it's hit points, it will attempt to flee in all cases. If it cannot flee, it will take one round to simply fade into nothingness. It is not known exactly what this ability is, or to where the Skwog goes when it disappears, but the power seems to ensure the Skwog's continued survival.