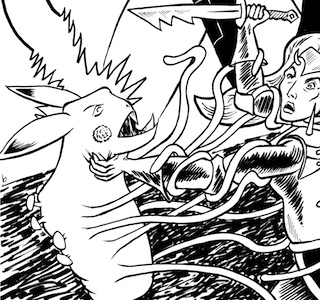 Growing mushrooms from it's back, the Cukahpi is a vile little creature of malice and spite, liking nothing better than to crush and choke living things with its many extendable, tendril-like limbs.

Anyone whose Stamina is below 9 that finds themselves exposed to the Cukahpi is subject to it's spore aura. Any such subject failing a DC 15 Fortitude Save finds their ability to naturally heal hp and ability damage blocked for 1d7 days.

The Cukahpi can use it's d20 Action Die for any sort of action, but can only use it's d16 Action Dice for crush attacks or spark attacks.

Its spark attack must 'rest' for as many rounds as the result of it's damage die, before it can be used again.


Cukahpi is an additional potential monster for the Monster Trainer class to track down and capture. You'll find more such creatures, such as the Nauseapuff, in the Working Class Alphabet zine.


Extracted from bygrinstow at 8:30 AM No comments:
Email ThisBlogThis!Share to TwitterShare to FacebookShare to Pinterest
Labels: cavern, dungeon, faerie, monster, wilderness 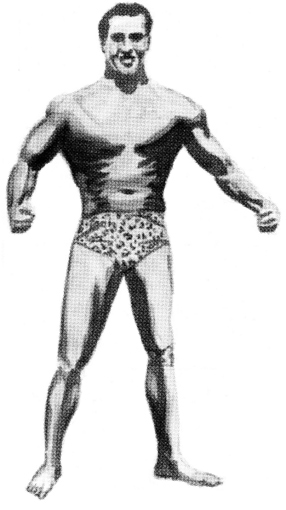 Charles Flatadz wanders the land, putting on displays of his physical prowess in towns and villages, and selling his wares: books (some all-pictures, some text) on better health and fitness, and ointments and concoctions meant to support that end.

He can awe the crowd by running through his routine of poses and catch-phrases. With each pass, he can awe 1d16 zero level individuals. Others are awed at the Judge's discretion, except for PCs, which should be left to their own devices. Those awed are inclined to spend money on Flatadz's products.

Flatadz's products set the stage for a further situation, left to the devices and invention of the Judge, but a few suggestions follow:

1) Flatadz's books and brews prepare the populace for something that is soon to come... Another, more malevolent visitor who will now feast on a selection of those who have 'bought in'...

2) Flatadz returns two to four weeks after his first visit. Those who partook of his products are susceptible to his control. He may simply want those under his power to spread word of him and increase his appeal and ability to sell his wares. This effect could be combined with the above, so the "enthusiasts' spread the word, and some small portion of them feeds the evil visitor — or feeds Flatadz himself!

3) The "Charles Flatadz" identity is completely false, a cover for: a powerful wizard... a reviled sovereign on the run... a scam artist who's escaping the results of one scam by running another...

4) The ointments and such cause users to sleep extra-heavily — Flatadz then burgles their homes.

Charles Flatadz can be found shilling within the pages of Inner Ham products.