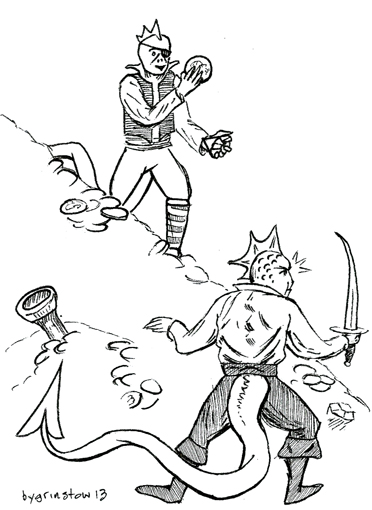 The tales told to make children behave say that skeevlings are the living shadows cast by evil magic's pale light. These minute devils (two-feet tall, at the most) are steeped in abilities that could only have a magical origin, and they live for nothing but plunder, raiding everything from village grain stores to massive treasure hordes of the deepest, darkest dungeons.

Skeevlings travel abroad in large numbers, easily 20-68 at a minimum, and usually above ground, unless they are bearing a treasure horde back to their homes. They speak very broken Common, and a gibberish-sounding dialect of their own.

They are not overly hearty creatures individually, but what they lack in fortitude, they make up for in mind-boggling magical power and single-minded group mentality. They can move through solid matter almost as fast as they can run upon the ground, bearing with them whatever they can carry as well. They regenerate damage (12 hp per round) such that if you don't manage to kill them with one blow, they are just as mighty as if you had not hit them at all. They are immune to the effects of acids and of force magic. They can turn invisible for 1d4 rounds at a time, but must 'rest' and cannot turn invisible again until another 1d4 rounds have passed. They can charge up their tails with magical energy, creating an effect similar to a Chill Touch spell, with a casting check of 1d20+7; each successful use of this spell reduces the initiative of the group by 1 point, drawing energy from their party to power it. They cannot lose this special ability, though it can fail to 'cast' (or they could run out of energy to manifest for it).

They are clever and crafty, using their powers to keep their opponents off-balance. They are proud of sniping foes by phasing out of a wall, striking and using their second action die to phase away back into a wall. They will use their invisibility power to conceal their numbers and observe any competitors for treasure. Though they may squabble among themselves, once one of them has been killed, they become a multitudinous force of vengeance. Even so, a few who have encountered them have discovered they can be bought off, though even fewer are willing to pay the price the skeevlings demand.

NOTE: Don't let the Hit Dice fool you; Skeevlings played to the hilt are a mid- to high-level threat. 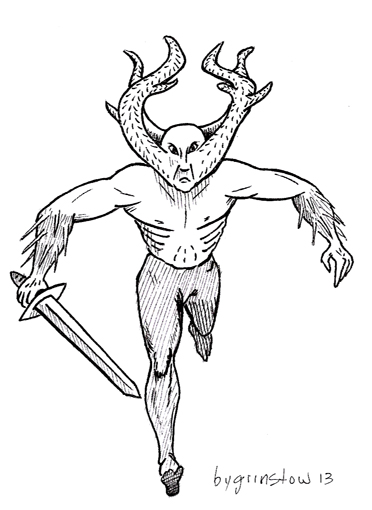 Elkmen (also known as Wildemen) are known as Alaphos on their native Fey Plane. They are a proud, animal-like race of beings, who are the hereditary defenders of the Elven hunting grounds, impeding the trespass of all save Elves and their guests. They are a grim and humorless lot, who understand the whims of Men not at all, regarding them with disdain, even to the point of behaving as if they cannot see nor hear humankind (unless the hunting grounds are invaded). They have a long history with the Elves, one of mutual benefit, wherein the Alaphos are far from servants, but more than mere allies; each race admires the other, while secretly glad they are not the other.

An Elkman will attack at range by swinging a forearm and launching one or more quills. He can aim for a single target, or spread the attack against multiple targets. When launching multiple quills, the attack bonus given is simply divided among the number of attacks as they see fit, e.g., two quills at +5 and +4, or at +6 and +3, one each against two targets or both against one target -- up to nine quills against nine targets (each at a +1 bonus) in one round. Each Elkman has 1d4+8 quills growing on each arm at any given time. They can launch quills into a melee with no chance to hit their own kind.

They will engage in melee by ramming a single target with their antlers at a full run, thereafter employing the sword, with which they are adept and cunning.

Once per day they can make a Reflex Save in place of a Fortitude Save, as a supernatural avoidance of calamity.
Extracted from bygrinstow at 11:10 AM No comments:
Email ThisBlogThis!Share to TwitterShare to FacebookShare to Pinterest
Labels: faerie, monster, NPC, wilderness
Newer Posts Older Posts Home
Subscribe to: Posts (Atom)