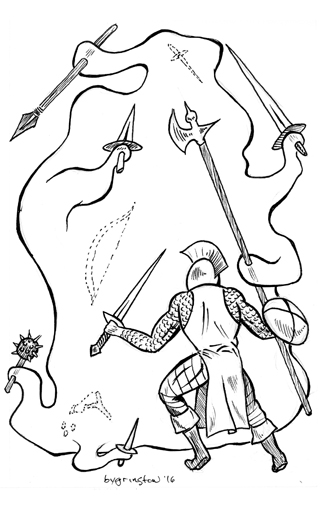 The Arsenal Jelly is a massive, mindless blob of translucent protoplasm. However, belying its mindless nature, it does seek to disarm its foes and use their own weapons against them — squooshing it's own gooey matter between the foe's hand and the weapon's pommel (or equivalent) to usurp the weapon. This seems to be some kind of bizarre reflex action, rather than a considered course of action.

Its gelatinous nature means it can fit through spaces smaller than it's volume by changing shape. It can arrange itself to face multiple foes, or potentially limit the number of foes that can reach it, depending upon the circumstances.

To grab a weapon away from the Jelly, assume success unless the Arsenal Jelly can succeed at the above 4-in-7 roll.

In using a foe's weapon, the Arsenal Jelly rolls its damage on a die one step down the Dice Chain from normal for the weapon.

The creature can focus it's efforts in various ways. This is represented by a pool of 5d6 which can be added to it's Action Dice rolls as the Judge sees fit, either singly or using 2 or more with one Action Die. These can be used for any action where the Action Dice would be rolled to determine the outcome, from physical feats such as spanning a large gap ("Jumping"). or attacking, and so on.

When first encountering an Arsenal Jelly, it could have 1d10 minus 1d6 standard weapons to start out; this could include bows and arrows, and other ranged weapons.They are stored inside it's mass, just barely visible until extruded for use.


Extracted from bygrinstow at 8:30 AM No comments:
Email ThisBlogThis!Share to TwitterShare to FacebookShare to Pinterest
Labels: cavern, dungeon, monster, ruins, wilderness 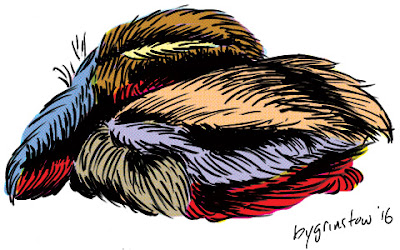 A furry jelly is a mass of dark amber gel, roughly the volume of a Clydesdale horse. It is a voracious carnivore. It converts bones it consumes into the shells of the eggs of its numerous offspring. And it extrudes the hair and fur of the animals it consumes as a complete pelt or the like to cover its own surface.

Half of it's Hit Dice represent the heavy fur the thing is covered in, not representing hit points which could theoretically be healed, but only replaced by feeding on more animals. Thus, a brief skirmish might reduce a furry jelly's 'ablative' hit points, but leave it completely unharmed.

It attacks by rearing up and falling down on its prey, knocking them down, covering them, and then dissolving them with acid. A target aware of the attack can roll out from under the creature by making a DC 15 Reflex Save; making this Save by 5 or more avoids the damage altogether.

Every time a target is affected by the jelly's acid attack, they are affected by increasing numbness. This takes the form of a -1 to Agility and then -1 Strength from each successive attack. This heals at a rate of 1 point per Turn after the attack is over.

A furry jelly reproduces rapidly, generating one egg for every Hit Die it consumes, approximately HD days after the prey has been consumed. The size of the egg can vary, depending on the size of the prey.