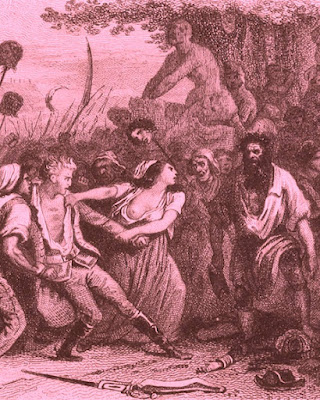 Rabble are a large, noisy, uncontrolled group of people, generally swept up by mischievous or malicious intent or fervor. When their approximate intent is to harm someone they can certainly be deadly, but remain unpredictable... The Rabble depicted here is designed with the intent to do harm.

Depending on the degree of their intent, use the attack level you deem appropriate.

Each round, as they envelop the subject of their anger, roll 1d3 and consult the following:

2) Employ all of their Action Dice, but any result of an odd number is considered as no action taken.

Each HD eliminated represents a member of Rabble becoming incapacitated or killed. Handle this distinction between injury and death by narrative means, not by numbers. Any time a 1/4th of the current total HD are eliminated, roll a Will Save for the Rabble vs. a DC 18. With a success, their temper is abated, and they should be stepped down the rank of attacks (e.g., from 'vengeance' to 'mayhem'). Stepping down from mayhem means the Rabble disperse... If however the Save is failed, they ramp up the scale of the attack ranks (e.g., from 'vengeance' to 'fury'). When rising beyond fury, add 1d6 HD back into the total, giving some members an extra HD owing to the near-madness of their rage.

Note that the size of the Rabble is not limited by the number of HD, but that the HD in larger groups of Rabble would represent the 'core' that the rest of the members are following. For tougher Rabble, give two of the HD to each member of the core. You may also increase or decrease the number of HD to suit the situation, as with any monster.


Extracted from bygrinstow at 8:30 AM No comments:
Email ThisBlogThis!Share to TwitterShare to FacebookShare to Pinterest
Labels: civilization, monster, NPC The crocodilian Knight is a demon hunter. He's journeyed here from his home dimension in search of the demons that infest this reality in order to exterminate them. His bearing suggests that he's been at this a long, long time and is well past the prime of his youth.

He is unspeaking, communicating only with icy stares, pointing with his weapons, and, rarely, nudging someone with an elbow. His silence and otherworldly appearance often makes him the target of suspicion and accusations.

What he lacks in physical strength is more than made up for in keen intelligence (equivalent of 3d6+6). He does not need to breathe and could survive indefinitely in a vacuum.

With his akani stick, an otherworldly polearm, he can cause his victims other sorts of grief in additional to physical pain and harm. Each of the results below is optional and only available to happen if he meets or exceeds the target's AC by the number shown:

He has befriended a dark-furred dog from this world, who travels with him loyally. The Knight will often play with the dog, as well as including her in the demon hunting process.

Of animal Intelligence, the Mount seems to serve the Knight as if almost by accident, generally paying him lax heed except in the heat of pursuit or combat. When the Knight is injured, the Mount pays him little attention and shows no particular concern for the Knight's welfare. The Mount is aggressive, and agile for its size — consider it to have +3 on his Agility score, if you need to roll up one for it.

It can fire a beam of verdigris colored light from it's mouth, which causes damage and frostbite.

The Mount can reshape its cranium at will, modifying it into a wide variety of limbs, tools, receptacles, and so on, stretching, molding, compressing and splitting the mass of its head in any number of ways. In a fight or crisis, the Mount may re-shape his head to hold spare weapons or equipment for the Knight, and be ready to pass them into the Knight's hand instantly.

How the Knight and the Mount communicate is unclear, except that they very much act in tandem when on the hunt. 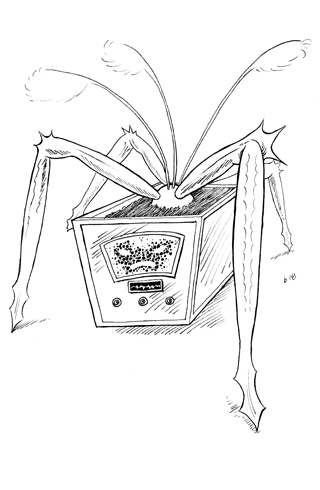 Tasked with overseeing up to a dozen teams of mining bots, the plant-based Controller stands 9 feet tall and 'communicates' in radiophonic crackles and noise.

They will aggressively defend themselves and the mining bots with pure thought striking into the mind of those they target. They are also physically strong (equiv. of 3d6+5), but take double damage from fire and suffer twice as much from intense heat.

The Controller is unaffected by magic. Magic weapons strike as if mundane, and spells simply wash over them. This reflects from how far afield they have come to extract their chosen ore (another dimension, an alternate reality, a micro-verse, etc.).

Extracted from bygrinstow at 8:30 AM No comments:
Email ThisBlogThis!Share to TwitterShare to FacebookShare to Pinterest
Labels: alien, cavern, dungeon, monster 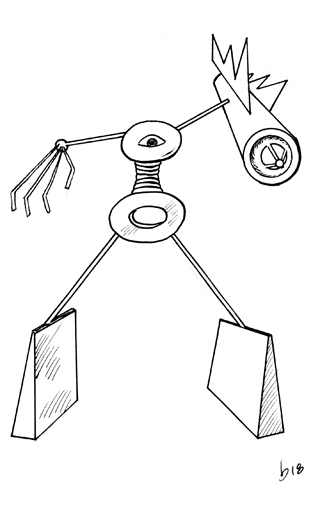 Working in groups of six or twelve, the non-verbal mining bots were brought from beyond this world to extract a particular ore of your choice, gold, silver, zinc, cobalt, etc. Their plasma arc mining tool happens to make an effective weapon.

Their 'feet' remain in contact with the ground at all times, as they slide along to move. They can also moving right up walls and across ceilings with the same ease as moving on the ground.

They do not function well in the cold, and take double damage from attacks of extreme cold or the like. They have a simple programming, but their Controller can re-program them as needed.