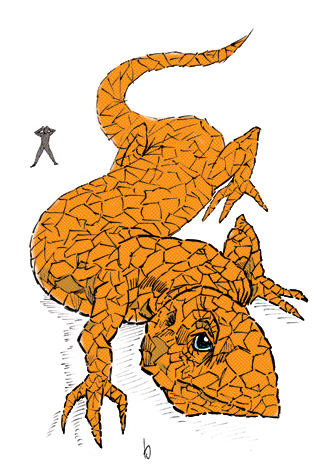 The Giant Stone Thing is a terror of arid wilderness regions. It is not known to hunt prey, or do anything a normal creature would do to survive — the dominant theory is that it is controlled by some high wizard for purposes known only to whomever that may be... or that whoever controlled the 120-foot creature is long-since dead, and yet the Thing remains, acting in an unpredictable fashion.

It can leap up to 9 miles at a time (using all of it's movement and Action Dice to initiate the leap).

It can give up 1d6 of it's Action Dice to create an effect like that of the spell Snake Trick, casting with a d24 at +11.

It can breathe out a torrent of snakes, as a breath weapon. Up to 1d24 1 HD snakes are generated each time, and they can bite at a +1 on the attack, for 1-6 points of damage. The burst of snakes covers from zero to 40' out from the Giant Stone Thing's mouth. Have everyone in range roll vs. their Luck, and for every point they are above their Luck score, they are attacked by that many snakes. No one has discovered if there is a limit to the number of times it can do this, or not...

Extracted from bygrinstow at 8:30 AM No comments:
Email ThisBlogThis!Share to TwitterShare to FacebookShare to Pinterest
Labels: cavern, desert, gigantic, monster, wilderness

Worshiped by a distant tribe or village, The Shapeless God has adopted these peoples for as-yet unknown purposes, and defends them fiercely.

With a diameter of over 50 feet, it hovers above the town, city, or village its wards occupy. When needed, it moves by teleportation, creating a swath of flashing lights in its path. When it wills it, these lights cause severe damage (as indicated above) which is distributed among all creatures and objects in its path of travel (roll the dice and divvy up the damage generated; don't roll the dice for each target. Though it could direct most of the damage to a single, large threat, it can't send all of it to one target).

Its teleport power also allows The Shapeless God to hover in mid-air, since it does not have solid appendages for standing. It has no need to breathe, so it is also comfortable in water of any type.

The Shapeless God can also generate bone-like calcified spear-like objects, which it can shoot from its tendrils with deadly accuracy.