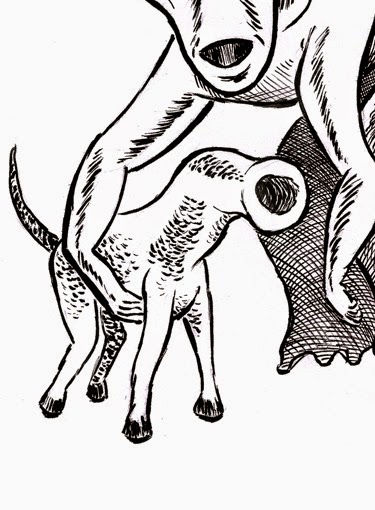 The Scarlsnipe is Tivvig's pet and mount, and it protects him fiercely. It will also act quickly to protect Voothus, but will always put Tivvig first.

Like Tivvig, the Scarlsnipe is immune to all mental-affecting spells and other such phenomenon. It can also turn invisible at will (even when not it's turn in the round) — an effect that lasts for 2 full rounds. It then must wait 4 rounds before it can use this ability again. This effect applies to things the Scarlsnipe is carrying (in saddlebags or otherwise) — and including Tivvig when he's riding the beast.

If Tivvig is "working" and has not brought the Scarlsnipe with him, it will wait with Voothus, wherever Voothus thinks best.

Extracted from bygrinstow at 9:00 AM No comments:
Email ThisBlogThis!Share to TwitterShare to FacebookShare to Pinterest
Labels: alliance, monster, wilderness 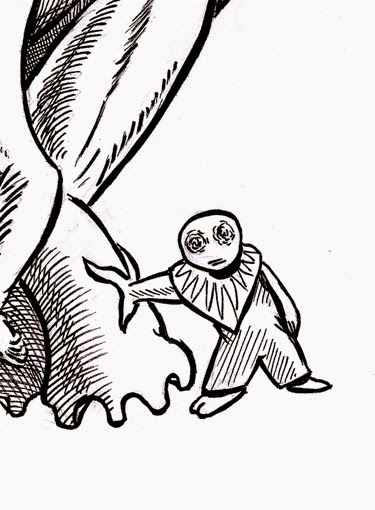 Tivvig is the brains behind a non-humanoid gang, of sorts. After Voothus (see yesterday's post) gathers some information about a target or targets, Tivvig moves in.

His approach will depend very much on what Voothus has found out. He may approach the Party while they are encamped and beg for food, meanwhile taking any opportunity to rob them of wealth and magic. Similarly, he might feign an injury.

Alternately, he might make a bolder approach, such as accusing the Party of trespassing on his land, and trust to his small size (under 3') to confuse and endear him to his targets. If Voothus has been able to gather some personal information, Tivvig might pass himself off as a soothsayer or mystic, or even as the spirit of a loved one "who has just passed" and try to infiltrate the Party that way.

His ultimate aim is to lie to their faces and make off with as many possessions of the Party as he can — whether this takes minutes or hours (or even days, if the con goes well for him).

His eyes have a mildly hypnotic effect, causing those watching him to relax and put their guard down. This serves to make his lies seem more truthful, and may give him an edge (bonus of 1d3 x 1d5 to Initiative and +2d4 to first attack and damage) if he is caught stealing.

He is immune to mental attacks and tampering of any kind. He can also ignore magical force, such as effects of the Force Manipulation spell, and any other effect that is defined as "magical force" or "magical energy" or is otherwise stemming from magic, but is not a defined "type" of effect (such as fire or cold, etc.). This "force" immunity extends to general magical bonuses on weapons.

He can mentally summon Voothus to him, calling him from a safe location once he has some swag and passing them to the hovering giant, who then carries the loot away and stashes it.

He will probably approach his marks on foot, to seem more sympathetic, but he is often otherwise astride his mount, the Scarlsnipe (see tomorow's entry).

Extracted from bygrinstow at 9:00 AM No comments:
Email ThisBlogThis!Share to TwitterShare to FacebookShare to Pinterest
Labels: alliance, monster, NPC, wilderness 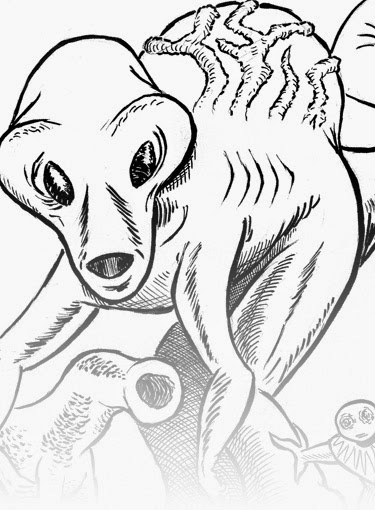 Voothus is the scout for a non-humanoid gang. His role is to observe a possible target, gather as much information as he can, and report back to his friend, Tivvig.

The usual operation involves tailing travelers through a woods or jungle, with Voothus hovering high above them, thanks to helium bladder he can inflate on his back. Despite his immense size (18' tall if he stood up straight), he can maneuver through the canopy with great stealth (silent on a 5-in-6), and use the foliage to his advantage to conceal himself (concealed on a 9-in-10). He can also hover high above a party camping in the open at night to perform his job (silent on a 7-in-8).

While he has never spoken humanoid languages, he seems to understand them perfectly well, noting details about where a party may be going, their strengths, and what they intend to do next. Needless to say, his hearing is excellent.

If pushed to fighting, and escape is not an option (even when spending all Action Dice for extra movement), Voothus can swipe with his tail, and cry out with a forceful, resonant bellow that can force foes to retreat (this targets all individuals within a 40' arc, and up to 30' away). But escape will remain a top priority, and his attacks will almost always be made to improve his chance of escape, or to protect his friends.

Extracted from bygrinstow at 10:30 AM No comments:
Email ThisBlogThis!Share to TwitterShare to FacebookShare to Pinterest
Labels: alliance, flying, monster, wilderness 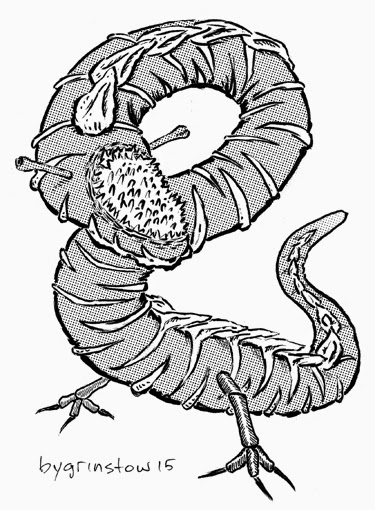 Zhydos are low-intelligence creatures of a huge scale, fully 30 feet in length in the largest specimens. Their eyes and hearing organs are at the ends of flexible stalks, giving them perception in all directions. They are covered in a chitinous partial exoskeleton, and attack by swinging their spinal-plates against their targets.

Their mouths, an ever-open orifice, are filled with jagged teeth and manipulating suckers which they flex to consume their prey. A zhydo aroused to combat will emit a low-frequency howl, which shakes the focus of it's opponents. This causes 6 points of Personality damage (or Wisdom) without a Save, although the damage heals faster than normal — 1 point per hour. This effect can only reduce the Personality of any individual by a maximum of 6, regardless of how many zhydos are creating the effect, or if a second encounter follows before the damage from the first is completely recovered.

Zhydos are only harmed by cold iron weapons, and are also highly immune to magic. This immunity is 100% against casters of 4th Level or below. For each Level above 4th, subtract 5% from 100% to determine the degree of immunity.

Zhydos nest in groups of 3 to 5 adults, and generally attack whomever causes them the most harm or threatens the young (when present).
Extracted from bygrinstow at 8:00 AM No comments:
Email ThisBlogThis!Share to TwitterShare to FacebookShare to Pinterest
Labels: cavern, dungeon, monster
Newer Posts Older Posts Home
Subscribe to: Posts (Atom)