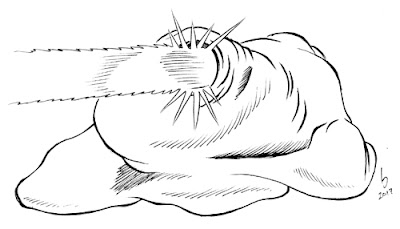 While two have never been seen together, their sightings and the stories about them suggest there is more than one Macro-Metallic Amoeba. It is broadly accepted that they are compiled of lesser dws from the life-vats of the deceased(?) sorceress Vala.

They appear as a gigantic mass of mercury with a volume in the region of 80,000 gallons and a resting circumference of approximately 86 feet. They move by extending numerous pseudo-pods, creating an undulating effect. They can deliberately move over objects and creatures to damage them, pounding them with these pseudopods, but their general movement is not as damaging as that.

They can extend up to six pseudo-pods at a time, with which to grab, shove, block, etc. They are not mindless, but whatever "animal" impulses (beyond survival) or reasoned goals they may possibly have are completely unknown.

The beam they emit as a ranged attack damages living matter less than inert materials, which suffers 3x damage per blast, when relevant. Living things are knocked prone by the blast, unless they make a successful Reflex Save vs. DC 15.

The Macro-Metallic Amoebas are slow to heal, regaining only 1d4 hp per week.