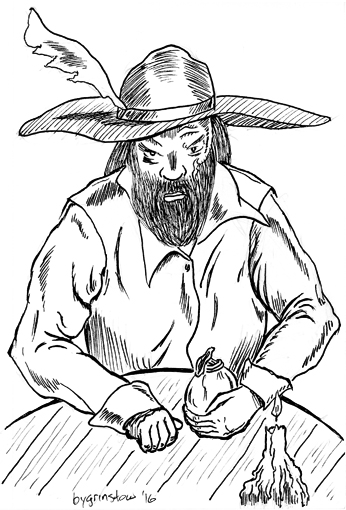 Nineteen years dead, Captain Kynan hunts for his killer. He appears outwardly to be perfectly normal, until after spending 1d6 Turns in his company, folks start to realize he's not breathing. Usually long before that, he's made his pitch to enlist the aid of whomever he's talking to in finding Captain Scorby, the man who sank Kynan's ship, killed Kynan's crew, and searches still for the treasure denied him by the crafty Captain Kynan.

Kynan can transfer any wounds inflicted upon his undying form by touch. Track each hit he suffers, and he can touch anybody to pass the wound on to them, thus removing the wound from himself. Were he stabbed by a dagger for 3 points of damage, he could give that dagger wound to anyone else (they lose 3 hp), and no longer suffer the loss of hp himself.

With a simple gesture he can send a 'punch' through the air to hit someone up to 30 feet away, or cause someone to freeze in place for a short time.

He cannot be harmed by ill effects that requires a Fort Save to avoid.

In using his unique abilities, he is sometimes mistaken for a sorcerer.

If he is aided in finding Scorby and exacting his revenge, he can reward those who have helped him by revealing the true location of his hidden pirate treasure and sharing it out.