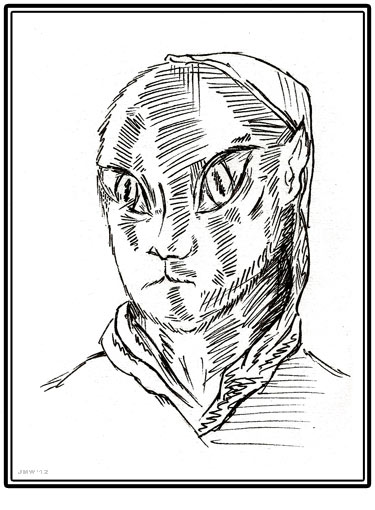 Naka are a fanatically law-abiding, nomadic people, traveling in small bands or individually, and expertly versed in the laws of the lands they move through, often even more so than the inhabitants of those lands. They are very gregarious, often heartily calling strangers "friend" even when first sighted at range. However, they are especially reluctant to discuss themselves or their origins, changing the subject quickly if asked about such things.

Mysteriously, they are always found traveling from west to east, however circuitously...

The Naka are of nearly human height and build, with cat-like, over-sized eyes, and dusky skin thickly covered in short, bristly hair.

They are great raconteurs, able to talk for hours, as well as being a great resource for travelers who meet them on the road. They can often describe hazards and challenges in the area sufficiently well to indirectly aid others' passage.

But travelers should be wary of evil Naka -- they have a nefarious influence they can manifest as they speak, causing listeners to fall magically, deeply asleep. Their words drill into the brain, echoing, reverberating, and remove all sense of time and place from waking consciousness. Listeners can escape this effect by making a Will Save vs. DC 13 +1 per minute of oratory.

Evil Naka are friendly with ogres and may put their targets into powerful sleep in order to sell them outright to ogres, or to advance some more complex ogre-involved scheme... Their numbers can include wizards, and such wizards favor toads as their familiars.

Naka wizards will be featured in a later entry of this blog.

Extracted from bygrinstow at 6:38 AM
Email ThisBlogThis!Share to TwitterShare to FacebookShare to Pinterest
Labels: civilization, monster, naka, NPC, wilderness