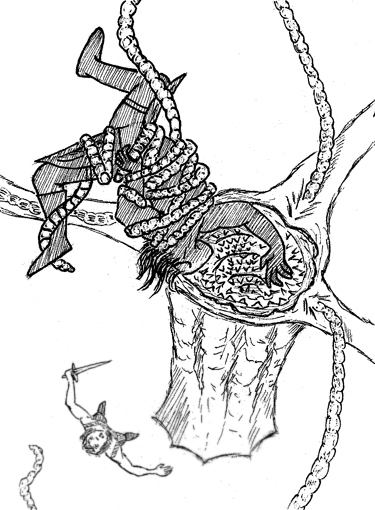 A false dryad is a rare, carnivorous tree. Their trunks are just tall enough (30 feet, generally) to obscure the fact that they don't reach to the same height as the trees they mimic. They are instead topped with a large maw, which is lined with a dozen or more circular rows of teeth-like thorns.

They have three or four major limbs, which each extrude one sinewy, flexible tendril of 50 to 80 feet in length. With these tendrils, a false dryad grabs prey and raises them high to deposit them inside it's deadly maw. Although the creature is willing to bite off it's own tendril in consuming prey, rather than give that prey a chance to escape, it may take several passes for it to aim writhing prey directly at it's mouth. Each round that it holds a victim ready to consume them, roll a d6; on a three or less its aim is foiled by vigorous escape attempts and it can try again next round. Adjust the number needed up or down depending on circumstances. Once in the maw of a false dryad, a victim suffers 4d6 damage right away, and each round thereafter, from the rhythmically contracting, bright orange esophagus and the many counter-shifting rings of thorns.

A false dryad attracts humankind prey by emitting puffs of thick mist from it's lower trunk. This mist vaguely takes the shape of a human or similar kind (based on former victims). As seen through the obscuring growth of a forest, it may appear quite convincing. When prey gets closer to investigate, the mist has spread and lost it's 'form', but lingers and affects the mind, dulling the senses of those breathing it (Fort DC 13; -1 to all rolls).

Attacking a tendril driectly: use the same AC as the whole creature (tendrils are not as tough, but are mobile), and can take the equivalent of 1/3rd to one-half the creature's HP before being severed. Given their length, once severed they may still be just as dangerous, albeit shorter.

The interior of a false dryad may contain possessions of former victims that were not digestible.

Are they ever known as "celestial man-trap trees"? No, no they are not.

Extracted from bygrinstow at 10:00 AM
Email ThisBlogThis!Share to TwitterShare to FacebookShare to Pinterest
Labels: 1pdc, dryad, monster, wilderness