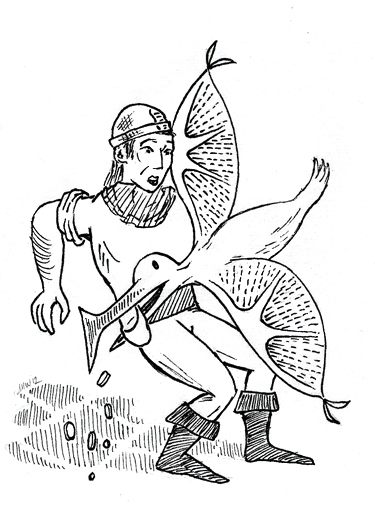 The auroc is a bird-like creature with a wing-span of nearly six feet, inhabiting caves, caverns and dungeons, subsisting off of veins of precious metals. The membranes of their wings sparkle in torch light like veils of glitter, greatly contrasting the dull grey of the rest of their bodies. They have powerful necks and backs and their beak features a dense, pick-shaped end, with which they chip away at rock and soil, in search of gold, silver and copper.

They can detect such metals, apparently by smell, through up to 40 feet of rock, and much further over open spaces. Men seeking valuables within ancient tombs may by attacked by aurocs if they are carrying coinage on their person. When an auroc attacks an individual, they do so by slashing quickly as they fly by, targeting the metals carried. Damage inflicted to the bearer is a secondary by-product, and such a strike may inflict no physical damage at all. It may take an initial pass for the auroc to damage whatever receptacle the metals are contained in, before it can actually get coins into it's gullet on subsequent fly-bys. It can swallow anything up to an apple-sized piece of metal, and it's digestive juices act quickly to corrode and breakdown the metal, making any retrieval an urgent and nearly impossible task.

An auroc will also be drawn to such things as silver daggers, or other similarly plated accouterments. It may try to grab at such larger pieces and wrest them from the weilder, flying off to nip pieces from the items to eat them, possibly making them completely useless, even if rescued.

They are skittish things, and if caught will frantically thrash about, attempting to fee themselves. They may well expend their life in the effort to get free.

Many a treasure seeker has been disappointed upon finding a long-lost dungeon, only to discover that aurocs have gotten there before them and have bored holes through all the walls and into all the rooms that formerly contained great treasures. One adventurer famously described an ancient labyrinth as having been "swiss-cheesed". The auroc has no interest in gems and precious stones, so such items may remain after aurocs have laid them bare -- if no one else has claimed them first.