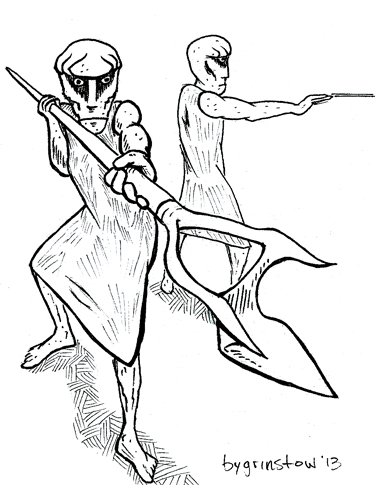 The Ur-Men live in spaces deep underground, sometimes in abandoned mines, sometimes in natural cavern formations. They were once either human or dwarven, but have been altered by prolonged exposure to the rare metal called Ur, which glows in the dark and possesses strange properties.

These Ur-Men stand less than five feet tall, and are lithe, but sturdy of limb. They eat next to nothing and seem to subsist off of proximity to the Ur metal, which they have an almost reverential awe for, wishing only to remain near it and keep others from mining it or disturbing it.

The changes wrought upon them by the strange metal include severe anatomical and mental changes, including a kind of near-amnesia of their former lives. They can shape metals with their bare hands, though not instantly without tremendous fatigue, and use this ability to create tools and weapons. Their minds are nigh-immune to all but the most powerful forms of domination; they get a +8 to Save versus any sort of mind-controlling effects.

They can also shoot beams of bright white light from their hands that weaken their targets (doing Constitution or Stamina damage, depending on your game system). If used against inanimate matter, these beams can splinter and crack them (1d6 damage against such things). These Ur rays, can only be employed every other round, as it takes time for the body to gather and channel the energy. They can also spread these beams of light to attack two adjacent targets, by reducing their "to hit" number by one, and that result being the DC for a Reflex Save to avoid the damage entirely. After a spread, an Ur-Man must wait an additional round for the power to return.

An Ur-Man found beyond his Ur metal-laden lair will be slower than normal, suffering a -4 to Initiative, a reduction in Movement by 10, a -2 to Reflex Saves, and using a 1d16 for their Action Die.

By Odin's shiny eye-patch, I feel like I've lifted the visual design of these guys whole-cloth from Jack Kirby -- but I can't figure out from what. I may have amalgamated elements of various Kirby creations into this creature (the crazy-deep perspective is an homage, for one thing), but the idea that I just blindly swiped them nags me... If you can identify where I'm (possibly) unconsciously snagging these creatures from, please let me know -- I certainly don't mean to infringe on his creations (nor the copyrights thereof)!