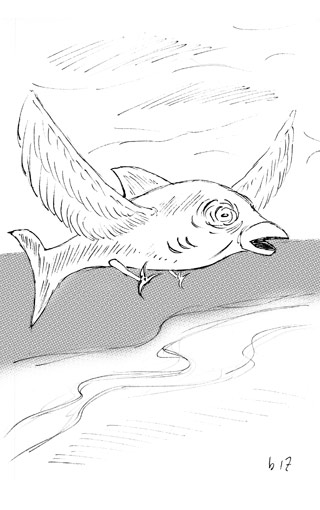 The owlshark can be sighted from coastlines or at sea, distinguished by its dorsal fin and it's wing tips breaking the water's surface.

It will attack small watercraft as well as individuals or small groups of people on beaches.

If its bite attack exceeds the target's AC by 5 or more, it has gotten enough of a bite to maintain a grip on the individual (Str 18) and will attempt to dive back into the ocean to devour them, thrashing them for additional bite damage each round when under water (no need to roll to hit).

Reference the above for the monster's behavior. While it has no treasure of its own, if it has been actively preying upon humanoids in an area, there may be much those folks had upon them which may now be scattered along the beach, just off shore...

Extracted from bygrinstow at 8:30 AM
Email ThisBlogThis!Share to TwitterShare to FacebookShare to Pinterest
Labels: BASIC, flying, monster, water