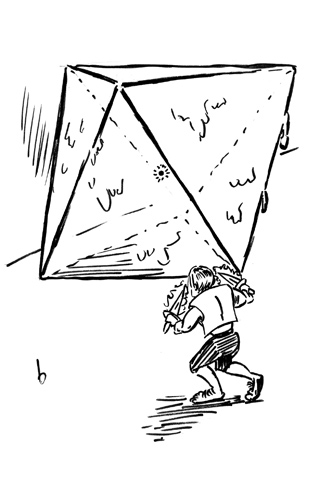 The translucent Octahedron must have been created by a wizard, perhaps one from another planet or another reality.

It slowly roams whatever level surface it can access, absorbing everything it can into it's squidgy, gelatinous mass. Any living thing that touches the mass, either on it's own or by having the mass move into it, is paralyzed unless it can make a DC 15 Fort Save. If successful, this Save needs to be re-made for each round of contact or each repeated contact. Regardless of making the Save or not, the creature will pull things into itself with a Strength of 17.

The creature will typically "roll" it's form over to prevent other creatures from 'stealing' its prey. Anyone paralyzed but removed from the creature will regain full mobility in 1d12 rounds.

At the center of its form is a tiny pin-point of darkness. Anything coming into contact with this pin point (other than the Octahedron's own form) is instantly annihilated, vanishing as if it never existed.

Once the Octahedron has started pulling something in, it takes 1d4 rounds for it to reach the center, plus one round for every 100 pounds of weight or fraction thereof. Lower oxygen needs while paralyzed should mitigate any suffocation situation when inside the Octahedron.

Some learned folk think the annihilation is how the Octahedron consumes things, as if it is eating them. Some think everything that vanishes appears whole, somewhere else...

[Judges may want to have some bit of debris or equipment or a hireling or what-have-you be the first thing absorbed by the Octahedron, so the players can witness the instant "destruction" effect before a player character is themselves so annihilated.]


Extracted from bygrinstow at 8:30 AM
Email ThisBlogThis!Share to TwitterShare to FacebookShare to Pinterest
Labels: cavern, dungeon, hazard, monster, polyhedral