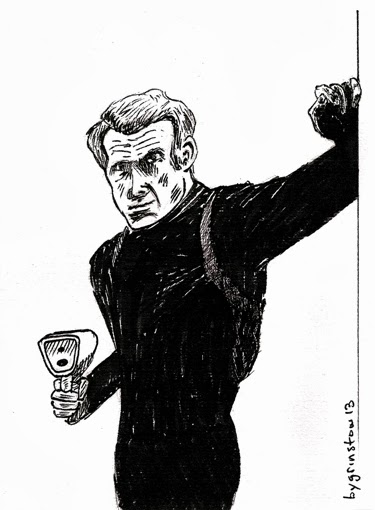 Boratus has been sent from another world to hunt down a specific target. It could be an NPC, or it could be one of the player characters. He may be sent to simply kill his quarry, or here to bring them back alive to the world of his employer.

He prefers to work alone, but will employ locals if it will help him against tricky or heavily guarded targets. He prefers to strike at range when his target is disadvantaged by circumstances. He will employ local weapons only under duress, preferring his own needle gun and mental strike. If the needle gun is wrested away from him and carried by a local, they will find it has but 3d20 shots left, and the means of recharging it may be beyond them and effectively impossible.

Boratus' bodysuit provides him with immunity to fire and to the strikes of bludgeoning weapons, falls, collisions, and the like, although it may not be obvious that this immunity comes from his suit.

He also has the ability to teleport by giving up one Action Die. Additionally, in conjunction with this ability, he can then appear as a very accurate duplicate of anyone he teleports within 10' of, while they will instantly and exactly resemble him. Their position moves up to 10' away from it's original place, at his discretion. Thus, in the confusion of battle or the bustle of a marketplace, he can confuse pursuers or combatants. He can even mimic voices, provided such information could be gathered beforehand (if the subject of the duplication were speaking at the moment he made the 'switch', he could pull this off). The target will only be able to speak with the voice of Boratus. The effect remains until he drops it, replaces it by again teleporting to a new target, or he and his 'doppelganger' are more than 60' apart. He can pull this stunt twice in a round by using both Action Dice.

And somewhere -- not too far away -- he must have the means of returning to his employer's world, hidden away...