THE GREATER DWS OF VALA 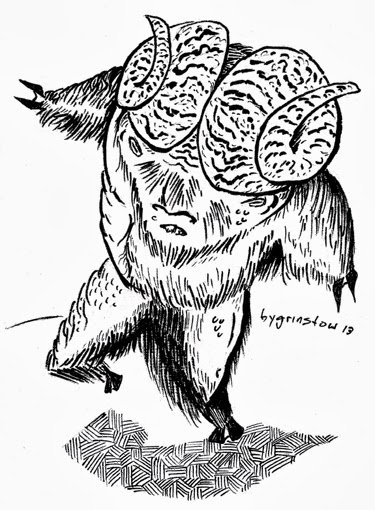 Of course, everyone knows about the multitudinous dws created over recent decades by the fell sorceress Vala. Small, dimwitted creatures all, misshapen and slow, when encountered they are at most annoyances of a minor sort, mainly for their unclean odors and persistent worming and groveling for food.

But the Greater Dws is another matter altogether. Here Vala employed the terrible science of the flesh pits she discovered in the fortress she acquired to fashion something of far greater power than before -- or since, so far as anyone knows. Many have opined that her skill with the unknowable technology is negligible even after all these years, and her tireless experimentation has been a shot in the dark everytime. Hence the foul stream of the minor dws to flow from her fortress. And hence her inability to duplicate the Greater Dws.

The feral beast stands thirteen feet high, a solid mass of muscle and bone, thickly but unevenly covered in mangy fur. Tiny arms hang from it's shoulders. Jagged teeth jut from it's tiny mouth. And it's head is crowned and dominated by a gnarled, massive spread of convoluted bone.

The Greater Dws can effectively ram from even as short a distance as four feet from a target, such is the power of it's legs.

Born in a stone fortress, the creature treats any such environ it wanders into as it's own territory. And there is the fact that shoots fear into the guts of men: the creature wanders the land, and when it finds a ruined castle, ancient tomb, or man-made labyrinth, it considers it to be "home", and defends it fiercely (until it decides to move on).