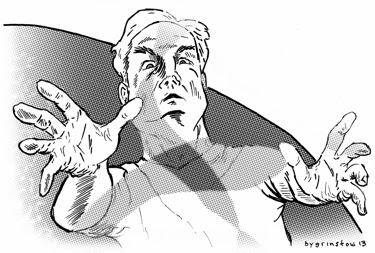 A luminion is a remnant of ages past, a guardian creature with a shape that flickers from radiant human, to vaguely human-shaped and into a swirling vortex of light and colors and back again.

It lacks a coherent physical form and cannot effectively interact with the world around it, beyond speech and gesture. It can be disrupted by physical attacks, but at a reduced impact. It can attack by projecting part of it's own energy at a target. A similar damaging effect occurs if the luminion and a physical creature intersect, but this does not drain the luminion as the projected attack does.

It will generally first warn intruders away verbally, doing so with increasing insistence and clearly spelling out the threat intruders face for their transgressions. However, it's language may be completely lost to time.

Within the building, corridor, or room the luminion was originally designed to protect in the dim past, it can teleport instantly from one spot to another. It cannot leave the area it was created within, though it can 'retract' itself into apparent nothingness. It will only do so when unable to effectively defend it's area and if being damaged. A destroyed luminion may be able to re-manifest within (1d30)d30 hours.

Astute delvers may find that areas patrolled by one or more luminions have a small black box mounted near their ceiling. Made of a rigid, unknown substance, these boxes are not impossible to destroy, and when destroyed seem to banish the luminion from that general area. Extremely clever and crafty individuals may find the means to remove such a box and place it elsewhere, using the luminion(s) for their own purposes...

This is a "luminion variant" based on the original Luminion -- sourced from The Savage AfterWorld -- and further details can be found there.

They are also featured in One Year In The Savage AfterWorld by Tim Snider -- "short adventures through radioactive wastes designed to be run over the course of a few hours." Do check it out!

Extracted from bygrinstow at 9:00 AM
Email ThisBlogThis!Share to TwitterShare to FacebookShare to Pinterest
Labels: alien, dungeon, guest, monster, ruins