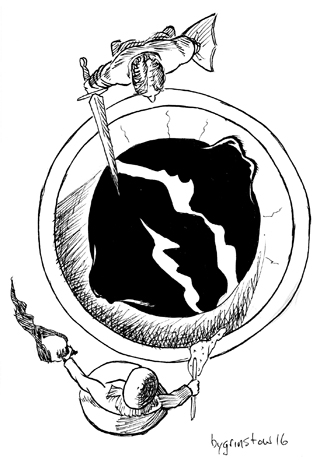 The HHROOUQK* is an amorphous slime with vast intelligence and malevolent intent. The monster has strong mental abilities, represented by spells for ease. It may cast each "spell" once per day, but if it rolls a "lost" result on a spellcheck, it can subsequently try the spell again until it does succeed.

The evil slime is an expert at mentally dominating and controlling humanoids. Use the Charm Person spell to represent this ability, and give it a +7 to the spellcheck roll. Once the HHROOUQK has taken control of someone, it can mentally communicate with them once per day drawing information from their mind and sending new instructions, and when needed can summon them back to itself to reinforce control over them.

The HHROOUQK also has the spell Hepsoj's Fecund Fungi, casting it with an additional +2.

The creature should have 1d10 additional spells (or at least equal to the number of members in the party, if running the "Future Tense" One Page Dungeon Contest entry). Choose 1 each of a Wizard's and a Cleric's 1st Level spells. Work up this way through the levels, until the creature's spell roster is full.


* Pronounced while drawing in a breath and ending with a wet noise in the throat.