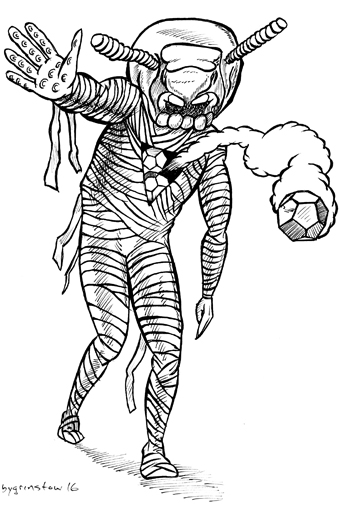 The Husks of Josiah were left behind on this world on a stopover by a far-flung intelligent race. Subsequently, they were put to use opportunistically by unknown hands, who installed the bomb launching device. Mindless, they are open to suggestion from anyone (though this won't be obvious when they are encountered). Clear orders must be given; they won't break away from a fight from such comments as "I wish these things would just leave us alone!" or the like.

Each Husk is different; some may have insect-like heads, while others have dinosaur heads or even proterozoic-type heads. All known Husks have human-like bodies. They may be dressed in anything from tatters all the way up to formal wear.

After any round in which they take damage, there is a 1-in-5 chance that they will lose their movement action on the next round. This means they can then use their Action Die as normal or for movement, limiting what they can accomplish in that round.

When they grab an opponent, they deal increasing damage for each round the grab is maintained, by pumping toxins into the air around their target. It is assumed that the target is struggling to break their grip. They simply make a new grab attack each round, if it misses, the grip is broken. Each round it is maintained after the first adds an additional 1d3 points to the damage roll. Anyone attempting to break away and flee once a grip is established uses the grab attack total as the DC of a Strength-check to break away.

Each husk holds up to five rocket bombs.