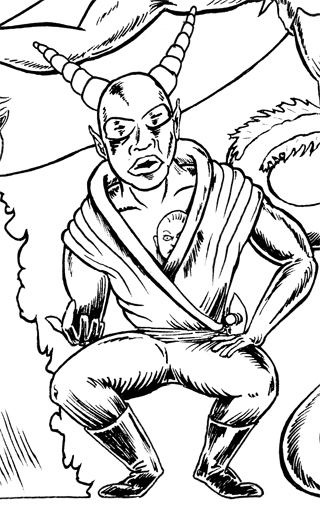 Wollatha has become so far removed from his Elf-kin that he is no longer allowed into Elfland. It is said that the baby-sized head that protrudes from his chest is his own heart, drawn out for all to see.

His magical aptitudes have taken strange turns... He can manifest grenade-sized multi-faceted spheres of matter to hurl at his foes. These will stick and explode, damaging the target and stealing 1 point of any Ability Score the Rival Elf chooses and that 'life energy' will float over and strengthen him (taking 1d3 rounds). He can also steal from Ability Scores with 1d4 rounds of contact per point.

He can alter his appearance to that of any humanoid type he has seen in person, though he can't duplicate particular individuals very well.

His horns give him infrahearing, letting him hear things beyond the usual human range. At the Judge's discretion, when the Rival Elf is hit with a damaging spell, such as Magic Missile or Lightning Bolt, he can instead take the minimum possible damage from the spell results table and lose one of his horns, as it is painfully burnt away from his head in a burst of acrid smoke and debris. The horn will grow back over the course of 3d4 months.

The small head growing from his chest gives him a second set of eyes; his initiative bonus is also a bonus to his AC. If the Judge desires, this can be re-rolled each round (or even for each attack against him). Anyone making a Will Save with the Elf in front of them is at a penalty of 2 while the disturbing infant-sized face is staring at them.