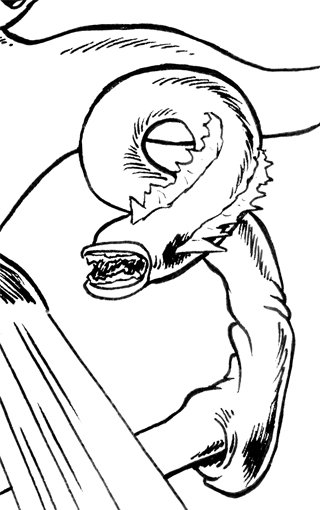 Driven by an insatiable hunger, Eethoka remains human in only the most minimal ways. A large snake-like creature formed primarily of a fine, gritty material, he remains as deadly a warrior as he was before his transformation.

His sinuous body lashes back at those who harm him directly in melee and moves in perfect silence, leaving a faint trail of gray dust.

Since he is composed of inert matter, he is immune to poisons, toxins and the like. He is perceived by magic and other extra-sensory means as an object, rather than a life form.

He can invoke the following magical effects by giving up his Action Die:

Find Familiar (pg 141) at 1d8+11 once per month, failing on a die result of "1". At the Judge's whim, the Rival Warrior may have one or more Familiars currently surrounding him (stats above reflect this). Some potential stats are given below.

Note: The Knight can ride the Bee!