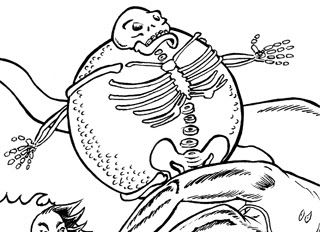 Ukix the Rival Cleric has been essentially turned inside out by some past encounter, existing as a pulsing sphere of "inner" flesh, with bones wrapping around it. Ukix hovers anywhere from 3 to 5 feet off the ground and teleports to new positions within 60 feet.

His touch steals life force from living beings and adds it to his own. Any hit points done in damage by his touch are added to his own hp total, up to his maximum of 50.

The spherical portion of the Rival Cleric's body can cling to anything, requiring damage equal to 1/4 of his current hp total to carve away enough of him to break the connection. If he chooses to grab an opponent in this way, it can be difficult to extricate the target, since he can drain their life to keep himself whole and maintain the grip, an excellent position from which to bargain for the target's life...

The Rival Cleric is stupid and makes mistakes which can cost him and his Party.