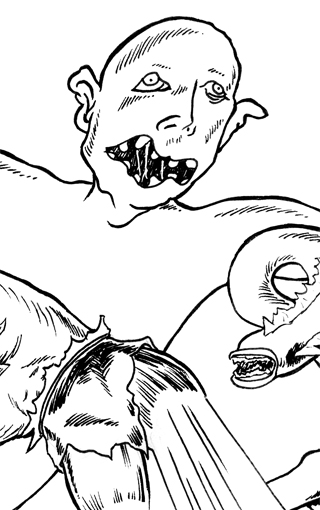 Timok the Rival Thief appears like a gigantic, distorted human-shaped balloon that's been nearly completely deflated, yet remains afloat, his head bobbling and swaying in reply to his movements. His vast flappy body covers an area approximately 100' by 70' and so anything within that space "under" the Thief is considered adjacent. While his movements are jittery and palsied, his ultimate accuracy remains high.

He heals at a rate of 4 hp per round, from all kinds of attacks, and recovers from other sorts of damage comparably quickly.

He is adept in the usual thiefly skills, barring Backstab and Disguise Self. Others may be very dependent upon conditions, such as having a suitably large shadow in which to Hide In Shadows (when used literally). If you'd like to use the bonuses of such skills, consider them as +10 across the board.

The Rival Thief can wrap around one or more targets (if grouped together) and attempt to smother them. Each round enveloped after the first requires a Fort Save vs. DC 16 to remain conscious, and reduces the enveloped targets' Stamina by 1d4. Failing the Save means the character has fallen unconscious. Remaining enveloped, they will be reduced to 0 hp in a further 1d3 rounds. Most attacks made from within the Thief's envelopment are made at -2 and damage is two steps down the Dice Chain, dropping an additional step each time Stamina drops. For each target enveloped beyond the first, add 1 to the Save DC.

The Thief is, as with all his kind, driven by acquiring gold and jewels.