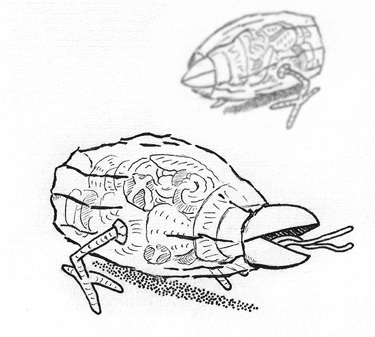 The blight known as the bhlestic is not much larger than the average sports ball. It waddles along on two bird-like feet, with it's thick, transparent carapace shifting back and forth like insane clockwork with each step. The thickness of that chitinous carapace means they take half damage from physical attacks. They can mimic voices heard in the past, with nearly pitch perfect accuracy.

Created by some unknown sorcerer of distant ages, the bhlestic is the scourge of all elves. Designed to harry the fey race, bhlestic most often congregate around Elven tombs, slowly increasing their numbers if left alone. Easy to clear away if dealt with regularly, they may appear in the dozens or even in the hundreds if the area of a tomb has gone undisturbed for a generation or more.

They will generally silently roost in high places around a tomb, if possible. They climb slowly, in a manner similar to geckos, but much less gracefully. If they detect potential prey approaching, they will use their mimicry to draw prey closer. They can then drop down on prey from a height of up to 20 feet without taking any damage themselves from the fall. If faced with a party of mixed race, they will swarm over elves first, other demi-humans next, and humans last of all.

For the ease of handling large numbers of bhlestic attacking a single character, determine how many are able to effectively attack and divide by three. Add that number to a single attack roll and damage roll for a 'single' creature (i.e., the statistics above). Woe to any explorer who falls prone in range of a swarm of bhlestic!

Extracted from bygrinstow at 9:44 AM
Email ThisBlogThis!Share to TwitterShare to FacebookShare to Pinterest
Labels: cavern, dungeon, monster, tomb