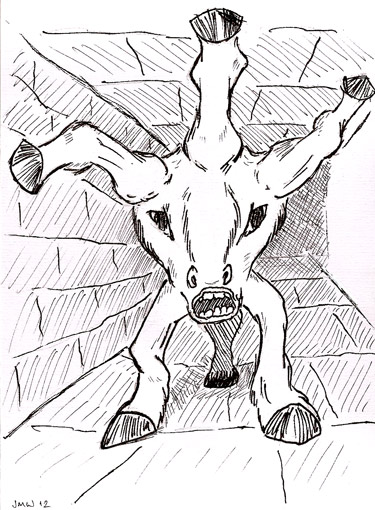 Fewer creatures are less nimble than the khambilaeus, but what it lacks in dexterousness, it makes up for in speed and brute strength. A monstrosity that looks something like a couple of draft horses put together the wrong way (with parts left over), it roams underground passages, looking to satisfy it's insatiable hunger.

It greatly prefers to have all of it's bulky limbs able to reach surfaces all around it, so it will not enter larger chambers or passages than it is adapted to, unless powerfully motivated. All of it's limbs are double-jointed, leaving no defensible angle of approach.

The khambilaeus absorbs traces of its environment through it's hooves, so that it takes on the coloring of it's surroundings, effectively making it nigh-invisible when more than 50 feet away, with a 3-in-6 chance to surprise explorers. Further, it can become shadow-like, whereupon it is nearly invisible in low-light situations, surprising potential prey on a 6-in-7 chance. It cannot attack in this form, and can only be hit by magic or spells.

When charging into melee, it can deal double it's normal number of attacks, if entering with surprise. The khambilaeus described here is large enough to nearly fill a ten-by-ten corridor; others suited to other sizes and shapes of passage have been rumored...

Extracted from bygrinstow at 8:50 AM
Email ThisBlogThis!Share to TwitterShare to FacebookShare to Pinterest
Labels: cavern, dungeon, monster