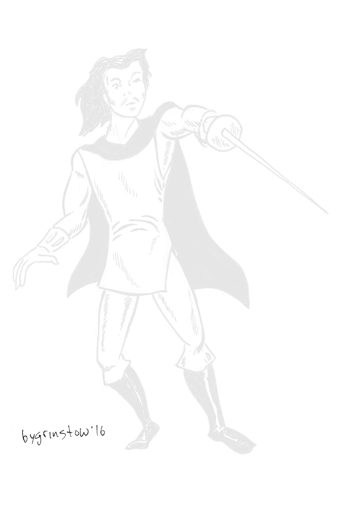 Two generations ago, a band of mercenaries took advance payment for their services — specifically to take and hold a specific, remote keep (or other location of your choice). In the fight, they suffered wounds from a magical weapon that caused them to slowly bleed out over the next two days, as they held the site for their pay-masters (and waiting for the balance of their pay). A year after their deaths, they rose on the site, though their bodies had long since been removed, and resumed their defense of it. They slew the occupants at that time, and have continued to make the site uninhabitable ever since...

The Bloodless Mercenaries' third Action Die can only be used for an attack with their foils. They can't dual-wield their spears and foils at the same time, but they can alternate their confusion attacks with foil attacks.

They are very nearly invisible. To attack them without any means of improving one's perception of them, lowers an attacker's Action Die by two steps. Note: the two-step penalty allows for 'partial' improvement in detecting the Mercenaries, which could improve an attacker's chances by one step back up the Dice Chain.

They also project a strong aversion in anyone attempting to attack them. Anyone targeting a Bloodless Mercenary with an attack must first succeed on a Will Save vs. a DC 15. Failing the Save, no attack can be made that round against the Bloodless. This includes ranged attacks — but does not include area-effect attacks directed at other targets that happen to catch the Mercenaries in the area, or attacks that somehow do not require the attacker to target anyone directly.

The Bloodless Mercenaries can cause an individual to suffer from severe confusion by a touch. This causes the target to become unable to act, overwhelmed by memories, false memories, and other psychic 'noise'. They can push through it and take action within any round that they can make a simple roll-under Personality check (though this does not end the confusion effect).

Extracted from bygrinstow at 8:30 AM
Email ThisBlogThis!Share to TwitterShare to FacebookShare to Pinterest
Labels: civilization, monster, un-dead, wilderness