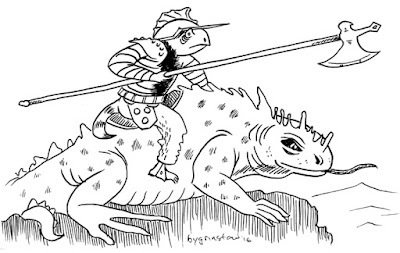 Undead Lizardmen have pale flesh and scales, red eyes, and are absolutely silent when they and their mounts are motionless. They fight fiercely, charging in on their mounts and making maximum use of their lances.

By touch, they can wither a target, reducing the target's Strength by 1d6 points. They can give up their d16 Action Die to channel this effect through attacks with their lances, as desired.

All successful attacks directed against them are reduced to 1 point of damage per damage die, such is their state of un-death. However, they do not recover from damage, except by the intervention of a corrupt Lizardman Cleric or higher power.

War Lizards use their rider's Initiative when used as a mount.

They can run across water and other such substances by moving at full speed (using their Action Die for Movement) and rising up on their hind legs.

Undead Lizardmen ride War Lizard mounts, employing polearms while mounted and carry short swords for close combat. They may be employed by Wizards of evil disposition as mercenaries, or may vigilantly guard the perimeter of Lizardmen lands. When their attacks score maximum damage, their deathly energies are channeled and the victim loses 1 point of Strength.

This is a large, four-legged lizard that some lizardmen use as a mount. It can run on it's hind legs across water, carrying a rider while doing so.


Extracted from bygrinstow at 8:30 AM
Email ThisBlogThis!Share to TwitterShare to FacebookShare to Pinterest
Labels: BASIC, cavern, dungeon, monster, un-dead, wilderness