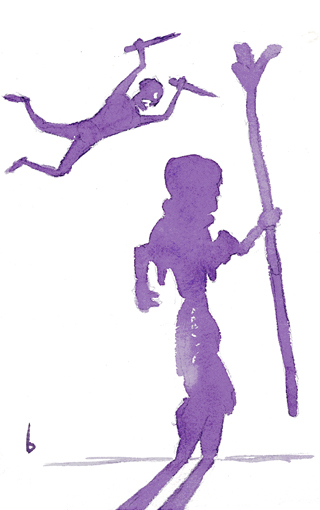 This creature is darkness made animate by magical items or magical detritus remaining undisturbed in darkness for a century or more. The magical energies literally bring the darkness itself to life. Like any natural shadow, it must remain on a surface, be that a wall, ceiling, side of a sarcophagus, or otherwise. It moves in an amoeba-like way, and can flow under objects through virtually nil spaces, so long as there is light on the other side.

A seeping shadow may follow a party of explorers, rather than attack at the first opportunity. Consider them to have a low animal intelligence and curiosity. They may follow the party in order to discover an even more powerful item of magic, from which to draw sustenance and energy.

It can communicate only by changing it's form to mimic that of objects and creatures and so on... If its Intelligence is rolled for, and the result is a 14 or higher, it can form letter shapes to "speak" as well as possessing useful knowledge about it's surroundings.

More powerful versions of the seeping shadow can sunder a target from their own shadow, causing them great agony and causing them to lose 75% of their current hit points, lose half their Stamina, Agility, and Strength, and to move at one-quarter their speed at best. If the seeping shadow then can completely consume the stolen shadow (taking 1d3+1 rounds to do so), these loses are permanent, but returning after 1 hour, otherwise.


Forgive me, but I was unable to work in the Appendix N reference/riff of "Seep, Shadow, Seep"...


Reference the above for the creatures' behavior. Their strength ranges from 12-17. To move into complete darkness, a seeping shadow must make a Saving Throw vs. Poison. Constitution replaces Stamina, and Dexterity replaces Agility from the above description.


Extracted from bygrinstow at 8:30 AM
Email ThisBlogThis!Share to TwitterShare to FacebookShare to Pinterest
Labels: BASIC, dungeon, monster, tomb