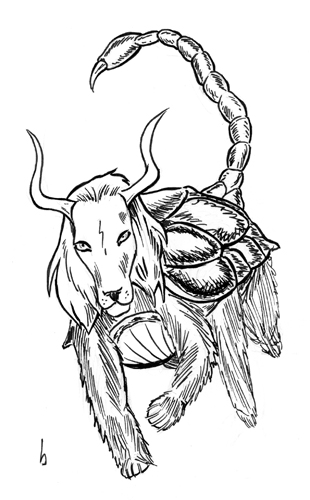 Weakening a region of several villages through abject fear, the tarrasque seems to pursue destruction for destruction's sake. The creature, the size of a very large ox, eats humans, up to three a day, if it can catch that many. It lays waste to swaths of viable land by spraying its ordure which causes a smoldering and tainting which leaves the soil as glass.

Its one known weakness is the susurration of the extremely devout, such as Clerics, priests, and (if the Judge allows) Paladins and the like. Their magics (f they have them) do not have extra affect upon the beast, but their utterances in devotion and their calling upon their deities works upon the creature's mind and softens the tarrasque's manner, dropping it's Action Dice (one at a time) down the Dice Chain, one step per round of such acts to a minimum of 1d12 Action Die, and lowering it's AC by 1 for every two such rounds.


Extracted from bygrinstow at 8:30 AM
Email ThisBlogThis!Share to TwitterShare to FacebookShare to Pinterest
Labels: dragon, monster, wilderness