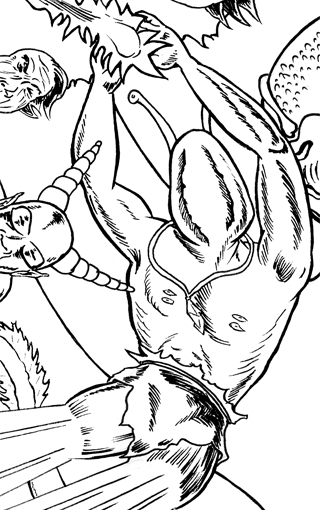 With an athletic frame and the head of a giant slug, Beltram the Rival Wizard defends the group from magic. Any incoming spell, whether directed at the Wizard or at an ally within 10' can be 'caught' by the Wizard if he makes a Fort Save vs a DC of 10 + spell's level, modified by the caster's Luck. If this Save is failed, he can 'burn' a point of his Fort Save to deflect the spell harmlessly in a random direction.

The Rival Wizard can catch a 1st Level spell with one limb and re-direct it with another. His head counts as a limb for this purpose. To catch a 2nd Level spell, he must use two limbs to catch and a different two to release it again. A 3rd Level spell can be caught with three limbs and cast outward again with the remaining two limbs at a cost of losing a point of Reflex Save and AC. Catching and re-directing a 4th Level spell reduces the Reflex Save and AC by 2. These loses return at two points per 24 hours.

A spell that has been caught, can be cast outward on the Rival Wizard's action at a new target or targets, using the original Spellcheck result to determine all effects.

The Rival Wizard can assume alternate forms, assuming any form on the Chaotic Familiars chart from the Rulebook. To assume a new form takes 1-2 Turns for a slow transformation, looking like a weird, shrinking (or growing) hybrid until the transformation is complete. During the transformation, the Rival Wizard is limited to either a Move action or the use of an Action Die. Use the Familiar stats for the Wizard while in the assumed form, except for hit points and Saves.

Any victim who dies from the Rival Wizard's acid kiss is injected with 10-50 slug eggs, which incubate within the target's body (even if the victim is revived by the usual means). This is extremely nasty. A revived victim will succumb to fever and weakness, losing 1 from a random physical Attribute each day until on the 1d4+6th day the slugs painfully emerge, doing 2d4 damage.

Paranoid in the extreme, the Rival Wizard has many suspicions and crackpot theories. These generally exempt his fellow party members, while the strength of the combined party is to his advantage, at least. Clerics are Wizards in disguise so as to steal knowledge from other Wizards. Elves are an abomination not to be tolerated, causing the downfall of all mankind within this decade if not fought. Halflings should be destroyed as an inferior offshoot of mankind, polluting the culture. The Judge should freely add additional cases of paranoia as suits the campaign. 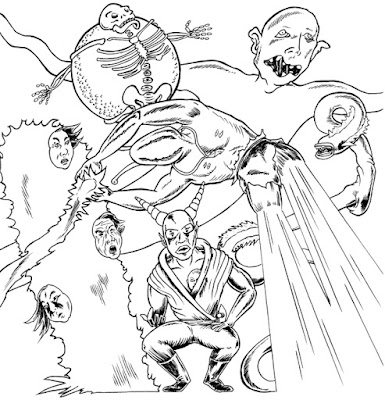