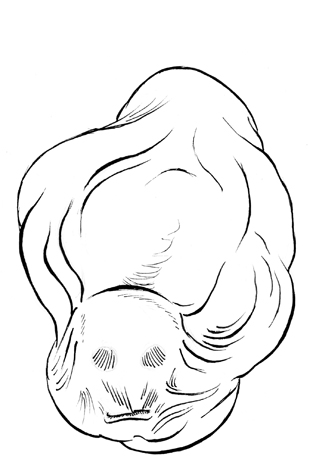 This demon appears as a human skull within a vast, empty sack of human flesh. The skull slides across the ground, dragging the excess of flesh behind it. When it speaks, the voice is muffled by the flesh, but intelligible.

It is a crafty thing, using terrain to it's advantage at all times, enabled by it's remarkable speed. Any attack made against it should be rolled with a spare six-sider. On a result of the high half of the range of numbers, the skull sack gets a +5 AC. Based on the circumstances and the actions of the PCs, the Judge should feel free to adjust which numbers invoke the extra AC.

The skin of the demon can exude a viscous, amber liquid, which will explode in exposure to air. A single attack die roll is compared to all ACs within the area of effect, and all so hit will take the damage rolled.

Anyone bitten by the skull sack is bruised by the teeth pinching them through the sack of flesh. This bruise will not vanish, except by extraordinary means, for the next 1d8 months, effectively branding the individual. This doubles the likelihood of encountering demons and those allied to demons in that time.

Additionally, those bitten by the skull sack will immediately and completely lose their voice for 1d14 days. Additional bites will not lengthen the time. Extraordinary acts may reduce this time frame or eliminate it completely. Stolen voices can be used by the skull sack.

With daemonic arrogance, the skull sack seeks either to control or to destroy everything it encounters, as if all of creation existed for it alone, deferring only to demons of a higher order.

Extracted from bygrinstow at 8:30 AM
Email ThisBlogThis!Share to TwitterShare to FacebookShare to Pinterest
Labels: civilization, demon, dungeon, monster, wilderness