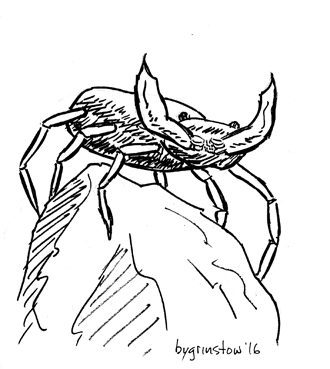 These 2-foot long insectoid creatures generate a tarry, magma-like substance in their bellies. They roam cavern systems, consuming smaller insects — and bits of rock and rock dust along the way.

When their territory is threatened, they will attack, using the searing hot substance in their stomachs to defend themselves. When they bite, they can inject the hot magma into their victim; when the d6 damage die comes up a 6, it is re-rolled and the result added to the total. A succession of 6s can obviously kill even a large creature, having been lethally burned from the inside out by the beetle's spew.

Similarly, if it spits a gob of the tarry magma at a target, the gob may stick, causing extra damage. If the damage die comes up as a 5 or 6, on the following round roll a d5 for extra damage. If that should come up a 4 or 5, on the next round roll a d4 for extra damage, and so on down the Dice Chain. Trying to remove a stuck gob quickly takes a roll-under Luck check, and if another round's damage has already been determined, it occurs from the process of removal or from remnants left on the victim, but no further damage can occur from that gob.

Extracted from bygrinstow at 9:00 AM
Email ThisBlogThis!Share to TwitterShare to FacebookShare to Pinterest
Labels: 1pdc, cavern, dungeon, monster