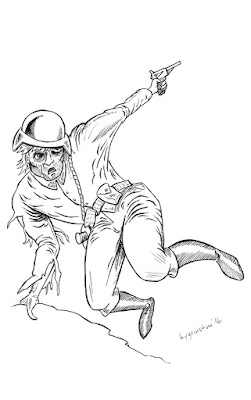 He was a capable soldier... But the Forgotten Soldier got left behind, either through an injury (that later healed), a clerical error, or a momentary doubt in his resolve — and though the war he was enlisted in is long over, he is unaware of that fact and still faithful to his duty.

Though he is out of practice, once he is engaged in a fight, his combat abilities awaken and return to him... Whenever he is missed by an attempt to strike him, his Action Die rises by one step, to a maximum of 1d30+1d20 (the second Action Die is added after the first reaches 1d30 and follows this progression: 1d12 > 1d14 > 1d16 > 1d20). When an attack hits him, his AC rises by 1d3, to a maximum of 21. All of these increases remain in effect for 3d6 Turns after the fight that brought them into effect ends, whereupon they fade back to base levels over a like period of time.

Those struck and harmed by the Forgotten Soldier's sword may become ill from the unclean blade. All so hit should roll a Fort Save vs. a DC 15. All who fail that check will find one of their Attributes suppressed for 1d3 days by 1d3 points, along with fever and chills. Each additional strike where the Save is failed adds +1 to the amount of the Attribute suppressed. This effect kicks in after 24 hours, striking (roll 1d5): 1) Strength, 2) Agility, 3) Stamina, 4) Intelligence, 5) Personality. It can be avoided by appropriate trained medical care in advance of the 24 hours elapsing.

His great advantage is that he has patrolled the area he is found in endlessly since losing contact with his unit. He can create a surprise attack in any situation where he can move about within the area of his expertise unseen. He can always move within his area stealthily on a 5-in-6. When attacking thereafter, if the stealth was effective, he gains an additional 1d20 Action Die for one round. He can use this die to again move into hiding, or for an extra attack.

If anyone attempts to use stealth against him within his expertly known area, he can see through it on a 4-in-5, and thereby spoil any surprise intended, or trail those attempting to leave the area.

The Forgotten Soldier's slugthrower becomes inoperable on a Fumble. It will take him 1d3 days with the tools he has on hand to fix it. He has 10x 3d10 rounds left (adjust that number to suit you, if you don't want this technology falling into the hands of your player characters [but why not?]).