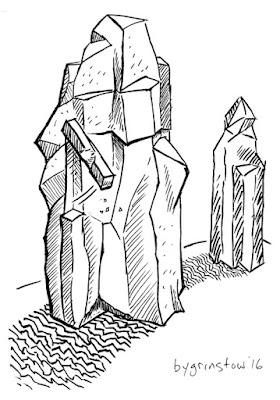 Protecting a lair or passage from intrusion are a set of standing stones which animate should any threat draw near. They appear as normal stone features of the cave system, but 'limbs' partially or completely cleave away to make attacks, and the entire slab of stone can move so as to reach a threat to attack it, or to make their special collision attack.

If a target is between two Stone Sentries, they will attempt to both rush at the target and smash together with the target sandwiched between them. They can use their Action Die for movement and still get an attack roll as well. Each gets to roll their attack; it could turn out that only one hits or both or none. They can also attempt this attack if they are within 60' of a wall, and the target is between the Stone and the wall. And the Mobile Menhir doesn't actually collide, but rather stops less than an inch from it's counterpart or from the the wall, when making this attack (thus it is not damaged from the collision).

The Sentries take double damage from bludgeoning weapons, or blunt heavy objects. The Judge will have to make a call as to whether any given spell will effect the Stone or not, and if it will do double damage, or not.