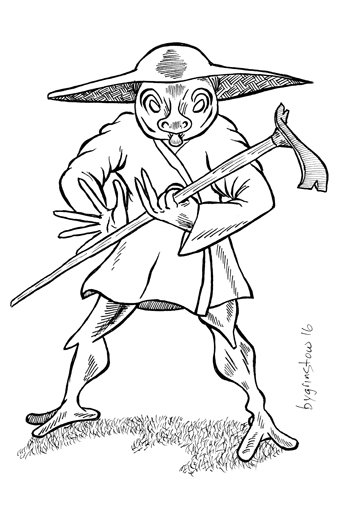 The Soor'ek are a minor race, only very occasionally found outside the Otherlands. They have a garbled language of their own, and a culture that emphasizes hunting and gathering and preparing for a massive, month-long feast in Autumn, followed by a Winter and early-Spring spent in a nearly-drunken state of stupor. Large bands have been known to eat themselves out of their own settled regions, needing to move elsewhere in search of sufficient food stuffs.

They are humanoid, standing no more than 3 feet high, with lanky limbs and an amber coloration. They are fierce to defend what they identify as theirs, and can be an overwhelming threat when encountered in numbers and in close quarters, moving with strange, disorienting, dance-like movements, and striking with a high degree of coordination.

GROUPTHREAT: For every four of them fighting together (no more than 5' between 'adjacent' members in such a group), they double their melee attack bonus (to a maximum of +16) and add +1 to their damage and AC. Thus, if nine of them were to attack, they'd each have an attack of +4, an AC of 15, and do damage at +2 each. Fighting a group of 30 of them would mean they each had attacks at +16, AC of 20, and add 7 to the damage they dealt.

This groupthreat effect when applied to ranged attacks advances the attack bonus as per AC and damage above, adding 1 per each group of four working together.

They cannot practice groupthreat when in their stupor phase.

Extracted from bygrinstow at 7:00 AM
Email ThisBlogThis!Share to TwitterShare to FacebookShare to Pinterest
Labels: 1pdc, cavern, dungeon, monster, wilderness