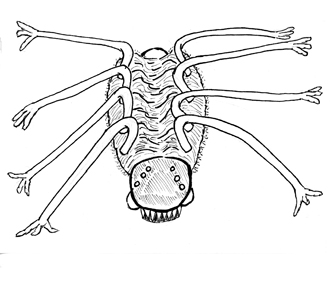 Cave spiders stand 2 feet tall, with a leg-span of 6 feet. They will attack any target that shows up clearly via their infravision.

Each additional blast of web against someone already entangled increases the DC by 2. Strength is used to break through web, and the web is highly flammable. If the DC of a web is too high for a character to break, should they roll a natural 20 in their attempt, they reduce the DC by 2, and can thus continue to try to escape (except as noted below).

If a target becomes entangled by webs with a DC of 30 or more, they are considered completely entangled and unable to move. This doesn't mean that a cave spider will begin eating the target right away, but they will soon move the target to a high position somewhere in their web network for consumption in the near future (1d3 hours).

Cave spiders will generally be found in "neighborhoods" of 2 to 3 spiders, with a complex network of webbing drastically changing the architecture of a cavern over a large area. They will create a large number of "sticky traps" for other creatures and characters to stumble into... Treat these like a web blast fixed in place, with the Save DC to avoid them and the Strength check DC to break out of them both the same number: 10+1d6

Extracted from bygrinstow at 8:00 AM
Email ThisBlogThis!Share to TwitterShare to FacebookShare to Pinterest
Labels: 1pdc, cavern, monster