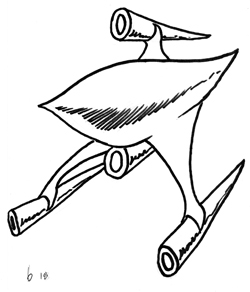 Selvoth Azavato's Scout Drone hovers over civilized regions, seeking any sort of fight or conflict to observe. It can recognize folks carrying weapons and armor, and assume they may be on their way to a fight. It can differentiate between a drunken brawl in an alley between amateurs and a battlefield fight between skilled, experienced fighters.

Once it has found outstanding combatants, uniquely powered individuals, or even terrain that makes a fight more interesting, it will send a homing signal back to Selvoth Azavato, while tracking those individuals so that Azavato can recruit them for bloodsport games back in the Magenta Dimension.

If it's not obvious so far, the PCs are the most interesting combatants that the drone has detected in a long, long time...