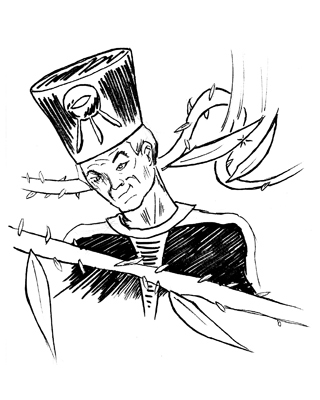 This is a bio-engineered plant used by the Planet Shapers to guard any equipment they need to have with them, but which they don't need continually, such as their means of returning home. The Float Vine is generally placed in a woods, swamp, or any setting where things can be concealed. If your campaign is set in tundra or deserts, get clever, folks.

The equipment in question is held within an all-encompassing bundle of vines, leaves, and roots. Stretching out from that point in all directions are vines reaching up to 500' in length. These snake and weave through the landscape (so as not to "point" straight to the items they are guarding).

The vines float off the ground by about three to four feet. Anything coming into contact with them alerts the plant-mind. Aggressive actions or those tracing the vines toward their center will be attacked by the supple vines, in an attempt to eliminate the possible threat. The vines can contract and extend themselves in such a way as to engage in melee with more than one opponent at a time. The closer this occurs to the center, the more vines can join the melee quickly.

The center of the vine creature does not move (hence the zero), but the vines themselves can move around (hence the 40).

Doing 2d6 damage with a bladed weapon to any given vine will sever it, though the section still attached to the center can continue to act. The HD are for the main body of the creature in the center.


Extracted from bygrinstow at 8:30 AM
Email ThisBlogThis!Share to TwitterShare to FacebookShare to Pinterest
Labels: alien, flying, monster, planet shapers, wilderness