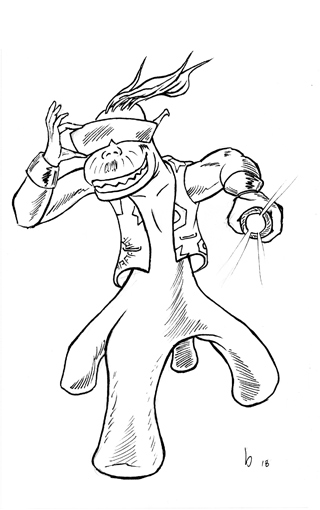 Selvoth Azavato is a sharp-witted, highly intelligent hustler. Ostensibly, his job is to recruit warriors and interesting combatants to take back to the Magenta Dimension to populate the gladiatorial arena. Whether he brings them back willingly or by force, his employers do not care, nor does he himself.

With him on this job are a scouting drone, which will proceed him, and his clockwork manservants. Also on the journey is his transit servitor, a living being which he can use to both get out of tight situations and to make the translation back to the Magenta Dimension.

Azavato himself loves being in charge of a situation. His greedy and grasping personality can just about overcome his xenophobia, and he can barely hide his glee at the thought of those he's recruiting being mangled and eviscerated in the arena.

His methods of recruitment can vary from monetary enticements and straight-up business negotiations, to violent press-gang tactics; whatever it takes to get the most interesting subjects for the arena, Azavato is willing to do it.

With a slight re-working, Azavato could be an easy way to bring DCC characters over to an X-Crawl game/campaign.


Extracted from bygrinstow at 8:30 AM
Email ThisBlogThis!Share to TwitterShare to FacebookShare to Pinterest
Labels: alien, bloodsport, civilization, monster, NPC